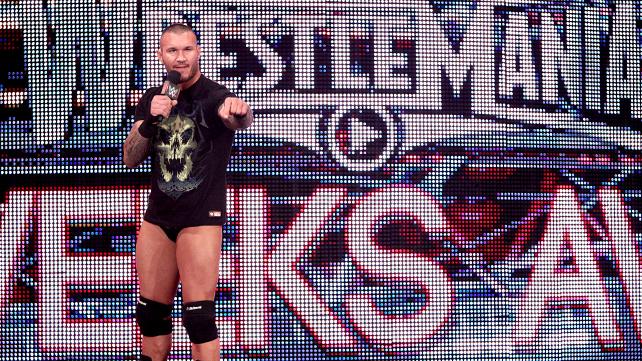 There are only 13 more days to Wrestlemania, and the WWE universe are on the edge of their seats to see which titles change hands in the coming days. This Monday, Randy Orton and Seth Rollins were at the center of attention again as Rollins and his Authority minions tried to take out Randy Orton for what he did last week to Rollins. And of course, Sting came out to help.

In the opening monologue, The Authority came out with Seth Rollins to basically praise Rollins and apologize to him for the way things went down last week, which resulted in Rollins getting his ass handed to him. Needless to say, Rollins and the authority want revenge as Orton wants a match with Rollins at Wrestlemania to which Rollins accepted last night, but on one condition, which was to have a match on Raw. More on that later. 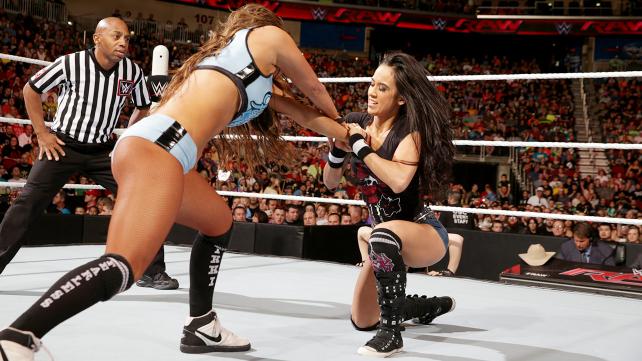 Clearly, the favored divas here are AJ LEE (CM Punk’s wife) and Paige (the beautiful British Diva) who are now frenemies. I know it can be confusing. Meanwhile, the Bella twins are cheating their way to winning matches and in general, just being jerks. Nikki Bella and AJ Lee squared off with Paige and Brie standing ringside. Nikki took advantage of AJ’s injured arm early on, but AJ came back with a vengeance. However, it was short lived as Brie an Bella started to get involved, which distracted AJ from her opponent where AJ took the cheap shot when AJ wasn’t looking with a Rack Attack for the win. But don’t worry, I have a feeling Paige and AJ will get their revenge soon. 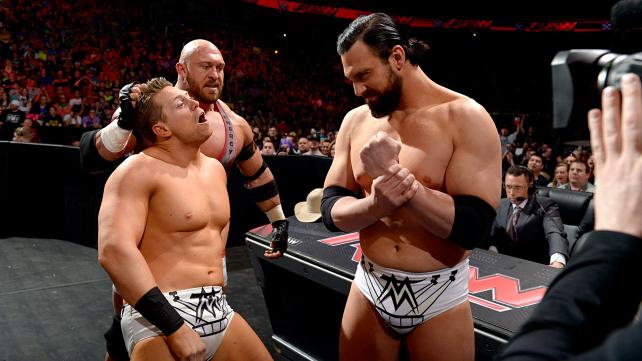 One thing before we start here. The Miz is just hilarious and has one of the best gimmicks these days with his stunt double Mizdow. I just hope he doesn’t get lost again in these big multi-opponent matches, because The Miz and Miazdow definitely deserve to be on top. But then there is Ryback, who is just a beast of a man who looks to be able to destroy just about anyone. Ryback is letting everyone know that he wants to win the 2nd annual Andre the Giant Memorial Battle Royal, where about 30 guys will be in the ring at the same time until one is left standing in the ring. The reward is a giant Andre the Giant trophy, which Cesaro won last year. The Miz and Mizdow aren’t seeing eye to eye these days, but that didn’t stop Ryback from trying to destroy both of them. However, Ryback did give Mizdow an opportunity to do some damage, but both The Miz and Mizdow were met with Ryback’s ferocitiy, which resulted in a win for Ryback. It’s going to be difficult to defeat Ryback come Wrestlemania. 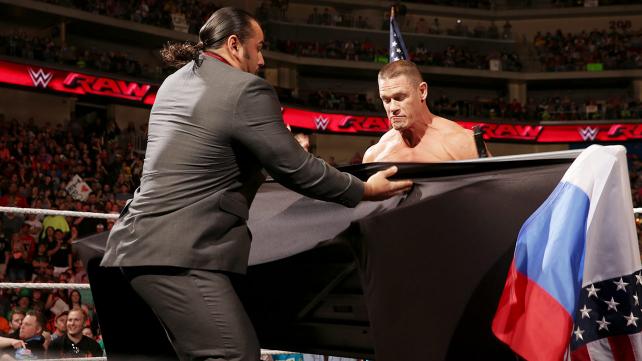 John Cena confirmed the match with Rusev at Wrestlemania  for the U.S. Title Belt

After some trouble with Cena trying to get this match with Rusev at Wrestlemania happen, Cena entered the ring and signed a contract for the match. Rusev came out with a lawyer and not Lana this time, where he would agree to fight in the match, but on one condition. That condition was that Rusev could read some anti-American propaganda uninterrupted. Cena stuck by his word and did nothing, and the match is now set in stone. The crowd chanted U.S.A.  through the whole things. Finally, it looks like the WWE has found a way for the entire audience to like Cena. 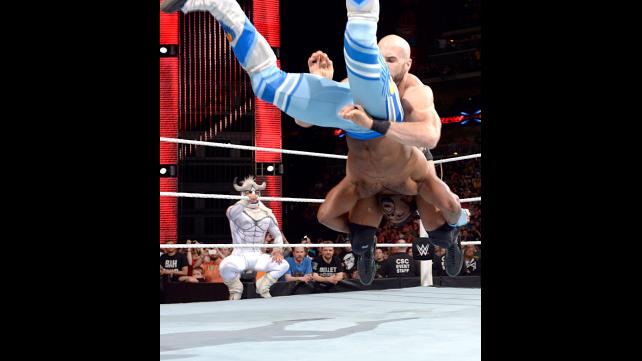 There are a few tag teams who are still trying to get their hands on the WWE Tag Team Titles. Cesaro and Tyson Kidd are the reigning champs right now, but Big E and Kofi Kingston of the New Day and the Los Matadores are doing everything they can to get the belt on their side.  It’s going to be difficult to beat Cesaro and Kidd, because their power and quick moves seem to out match anyone who steps up to the plate. And that was the case on Raw this week. Los Matadores watched the match from ring side to see what their up against, because come Thursday on Smackdown, all three tag teams will face off in  the first ever Six Being Interspecies Team Match. It’s kind of a dumb gimmick, but all these guys are highly entertaining to watch with their high flying acrobatics.

Well, this was supposed to be a match on Raw, but like before, Erick Rowan got punched in the face by Big Show before he got to the ring and was unable to fight. Don’t get me wrong, I like both these guys, but here we have a lot of force and power and almost zero agility and speed. So whatever match these two have will sure be slow. Let’s just hope there will be a hardcore stipulation somewhere down the line. 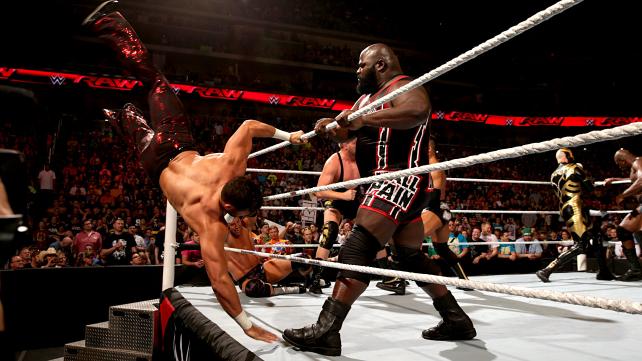 Ugh. I’m just not a fan of Mark Henry. Sure, he won the strongest man in the world contest several years ago, and he is super strong and scary, but this story line and gimmick is just pathetic. A few months ago, he cried on stage, literally when Rusev was talking smack about the U.S.A. But then he quickly became a bad guy and the WWE hasn’t known what to do with him sense. Now he comes out from time to time, disrespecting the good guys on stage, only to have his ass handed to him every time. So, since the WWE doesn’t know what to do with him, they threw him in this Andre the Giant Battle Royal, where he basically cleared the ring of about a dozen or baker’s dozen wrestlers. He definitely won’t win the Battle Royal, but someone much smaller than him will body slam him for the win, like Cesaro did last year to Big Show. 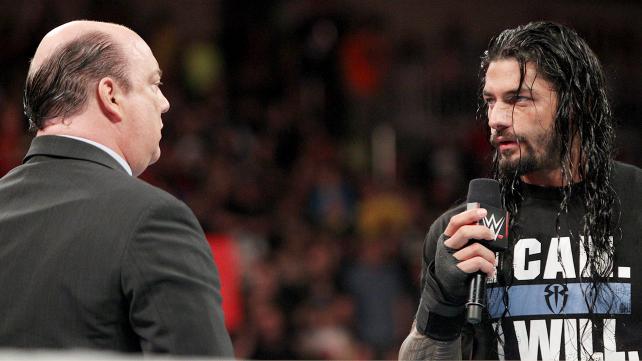 Paul Heyman and Roman Reigns Talked With Each Other

If Paul Heyman is speaking, you listen. Heyman is time and time again proved that he is one of the best people in the WWE when it comes to hyping events and wrestlers. And over the past several weeks, Heyman has appeared on television, telling the WWE universe that his client Brock Lesnar will destroy anyone and anything. Even when his mic goes silent due to technical difficulties, but has now become a joke gimmick each week, Heyman rolls with the punches and yells at everyone until we are hypnotized in his and Lesnar’s realm. But this week on Raw, Heyman’s antics caused Roman Reigns to get in the ring to face off with Heyman. Reigns has a new shirt on that said, “I can. I will.” That insinuates he will indeed beat Brock Lesnar, which is a clear message to the One in 21-1 that hell will come his way. But next week on Raw, Reigns and Lesnar will finally be face to face in the ring. Looking forward to that. 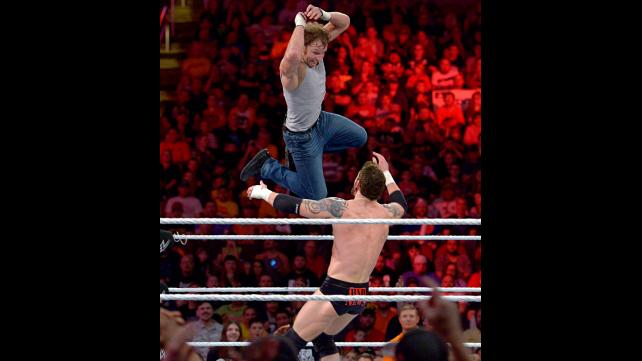 Probably the best match at the upcoming Wrestlemania, or at least the most fun will be for the Intercontinental Title Belt. It will be a seven man Ladder Match, which who ever climbs up the 40 foot ladder to reach the belt, wins. the seventh man, which is R-Truth, sat at the announcer’s table once again to watch the fight. Of course, all these guys are would be enemies, all vying for the title, but for Raw this week, they were on 3-man teams. Basically, they put aside their differences to take out one another. It was a solid match, but Ziggler accidentally super kicked Daniel Bryan, and Dean Ambrose countered Bad News Barrett’s finishing move and won the match. However, R-Truth got involved to which Bad News Barrett finally got his title belt back from R-Truth while doing some damage to anyone who came in contact with his fists. So finally, Bad News Barrett has some good news for a change. 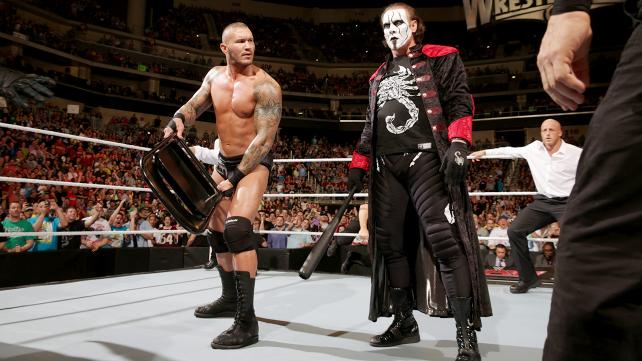 This match never happened. Over the course of RAW, we saw the authority fighting with each other and yelling at Seth Rollins for a variety of reasons. This was only to confuse Randy Orton before their fight, as the match was set to start, the entire Authority crew surrounded Randy Orton to severely injure him. But the arena lights went out and Sting appeared alongside Orton and the two beat everyone up. Yes, there was an RKO and Sting beating people with his bat.

This was a solid RAW show and only amped up the suspense to Wrestlemania. Only one more RAW before the biggest day in WWE history.