This past Saturday night Dallas witnessed a real rarity in UFC cards as not 1, but 2 champions lost their titles.  It’s been six years since that feat has happened.  A packed American Airlines Center was already hyped but a stacked line-up of fights.  The UFC may have Dana White as the face of it’s organization, but one of the real masterminds is matchmaker Joe Silva.  His ability to create lively lineups has translated to a slew of successful shows.  There are always duds along the way, but even the pre-lims on Saturday night had some exciting moments.  Dallas’ own Ryan Benoit got things heated with a shocking 2nd round KO of Sergio Pettis.   Sergio had dominated the first round but a timely hook by the feisty “BabyFace” Benoit led to a full barrage of haymakers before the ref broke up the beating.  Benoit’s emotions got the better of him as he cheekily kicked Pettis in the butt moments after the ref ended the fight.  The reply on the overhead big screen caused a stir of boos and unleashed a wild twitter attack on Benoit.  His apology quelled the situation and allowed for the great fight card to keep chugging along nicely. 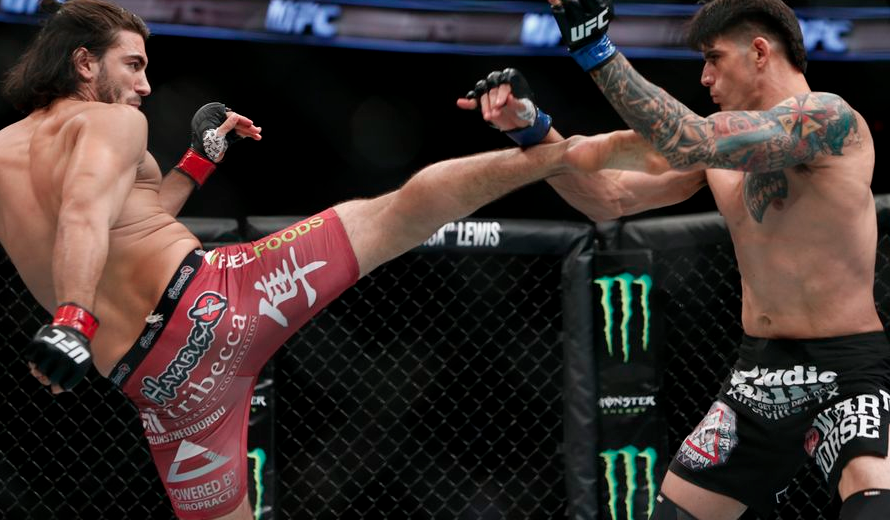 The Undercard itself had a grouping of The Ultimate Fighter show vets on it.  Two fights stood out as Beneil Dariush held the pace of his fight with Daron Cruickshank before slipping in a rear naked choke that ended the fight.  Beneil is a solid person to keep an eye on and should have a step up in competition in his near future.  The really exciting undercard bout was Brit Ross Pearson landing a vicious right to veteran Canadian Sam Stout in round 2.  Ross will see a renewed backing after this impressive victory and like Beneil should command a bigger fight coming up.  Overall the Pearson KO look to put the Main Card on point to have some good fights.

The Main Card was a bit lackluster with Alistair Overeem seeming to toy with “Big Country” Roy Nelson for a majority of the fight, but the most dangerous punches came on 3 flurries by Nelson.  Overall the fight ended in a decision and mirrored the lackluster decision victory by Jonny Hendricks over Matt Brown.  At least the Dallas based fighter was able to showcase his usual strength by slamming Brown twice and should have had a third one if not for Brown’s holding on the fence.  Hendricks will have to await the outcome of Lawler vs Rory to determine his next fight.  Overeem once again puts himself into the heavyweight picture.  The other fights were all one-sided matches.

Henry Cejudo dominated veteran Chris Cariaso for all three rounds winning a unanimous decision.  He was quicker to the punch and though his weight cut caused him to personally feel out of shape it wasn’t apparent in the fight.  He is an obvious athletic presence in the division and should command a flyweight title shot against Demetrious Johnson.  Overall Cejudo looked at ease throughout the fight. 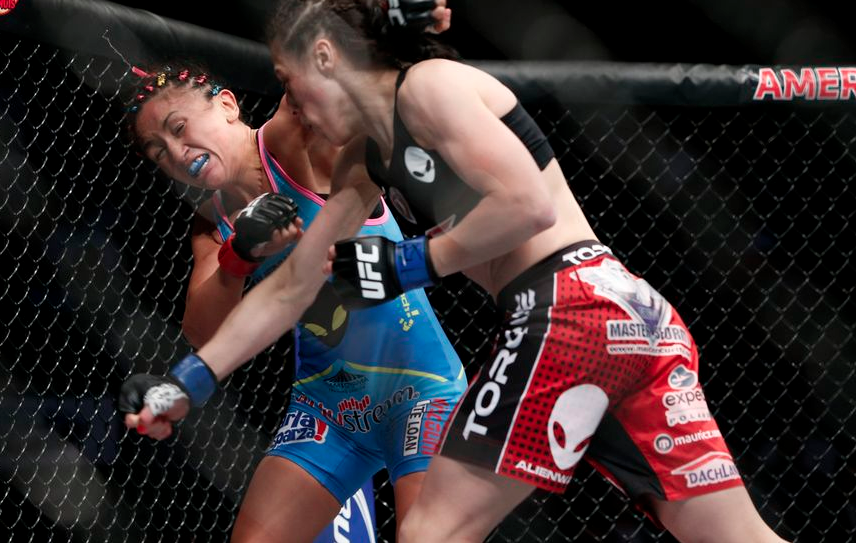 The most impressive performance was the co-main event as Joanna Jedrzejczyk completely destroyed Carla Esparza.  Carla continuously tried to take Joanna down but each failure lead to a barrage of punches by the challenger.  Carla’s face was bruised and battered by the time Joanna finally put on a fight ending flurry in the end of the second round.  Joanna showcased a fearless mentality and her pinpoint punches were the most impressive of all the fights.  The new straw-weight champion continues the UFC’s highlight of woman fighters.   Jedrzejczyk is an electric attack minded killer in the octagon and her fights should always be exciting.  The obvious next step is to fight the winner of Claudia Gadelha vs Aisling Daly at UFC Fight Night 64.  A rematch with Gadelha would be awesome as the split-decision victory by Jedrzejczyk was hotly debated.  Overall the punching ability of Joanna immediately makes her more exciting champion then Esparza.

Rafael Dos Anjos commanding unanimous decision over “Showtime” Anthony Pettis is impressive because Rafael was coming off an injury a month ago and still controlled the fight.  Pettis did get his eye poked early on and he seemed completely effected by it all night.  But the total man-handling of Pettis by Dos Anjos was impressive to witness.  The stacked light heavy weight field makes for some intriguing matchups and Pettis is far from out of the running.  A rematch isn’t out of the question either.  Dos Anjos looked stronger and more athletic all 5 rounds.  The #AndNew dethroning in Dallas has opened a lot of questions, but for a man like Joe Silva that should be a real treat.  Expect some fun few months coming up.

3 Stars of the Night: