We just got word that starting in the upcoming Season 5 of Showtime’s ridiculously popular series ‘Shameless‘ there is going to be a guest star featured. The ever-so sexy Dermot Mulroney will play a former bad-boy and recovering addict, Sean Pierce, Fiona’s (Emmy Rossum) new manager at Patsy’s Pies. Most recently he featured with Meryl Streep and Julia Roberts award-winning ‘August: Osage County‘. Currently, Mulroney is in production on his first horror-genre movie ‘Insidious 3: Into The Further‘. 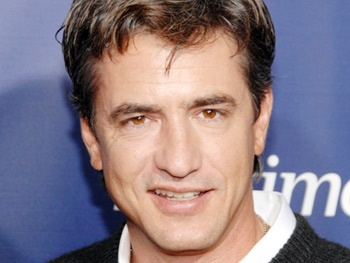 Last time we saw the Gallagher family, Frank (William H. Macy) was battling liver failure, Fiona’s own events led to her doing some jail time. ‘Shameless‘ on Showtime is based on the long-running hit UK series. Produced by John Wells, Andrew Stearn, Christopher Chulack, Davey Holmes and Nancy Pimental.  The show has been nominated for 5 Primetime Emmy’s and a passel of other accolades.

At the risk of dating myself, I became aware of Dermot Mulroney when I first saw ‘Young Guns‘ at 10 years old. Something about the name ‘Dirty Steve’ stood out to me, then 7 years later when Harry Connick, Jr. was the greatest man I’d ever heard of, I saw a movie that combined the two: ‘Copycat‘. Mulroney playing the part I pictured myself doing when I grew up, with Holly Hunter. Putting the bad guys away. Connick was a serial killer that I became crazily infatuated with, having to read tons of true crime and Alex Cross (James Patterson) books. However, life didn’t take me down the career path that led to my catching serial killers, but I get to write about movies with serial killers in them!