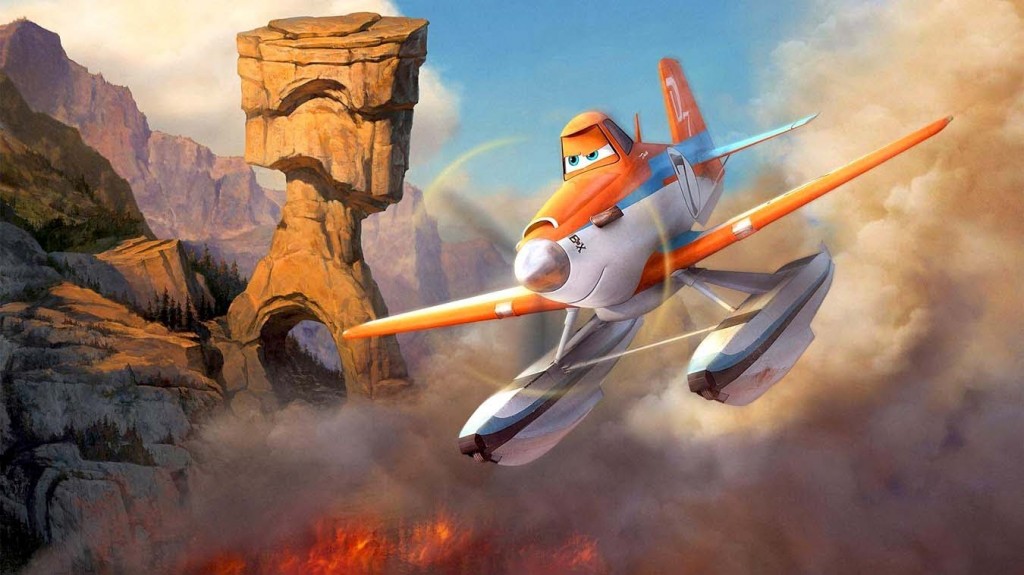 Last night my six-year old son E and I saw the next high flying adventure of Dusty Crophopper in ‘Planes 2‘. He was so excited to see the movie since he loved the first film . There are a lot of things to like about this movie, such as the theme of bravery, the old saying that you can be anything (the continuing theme from the first movie), and that sometimes you have to follow instructions even when you don’t want to, which are important things for children and adults to remember.

Dusty has to accept that he can’t continue racing, due to a failing part that cannot be replaced. Thus, he does what he can to save his town by becoming a certified firefighter. The responsibility is never shrugged off by the other characters and is always treated as seriously as it should be. It’s a dangerous job and they let you know it from the first frame of the film, which is a title card dedicated to firefighters around the world who risk their lives to save the lives of others. The humor is integrated well between childish fart jokes and the more adult humor, which is always hard to pull off, but there wasn’t as much real humor as the movie seemed to hope for. E particularly enjoyed all the firefighting and learning about all the different jobs rescue workers can have. It was honestly a pretty educational film. The music is also perfectly paired with each scene and never has AC/DC’s Thunderstruck been used so perfectly. I was asked to put it on my iPod as we were leaving the theater.

Unfortunately, I found more things to dislike than to like in the film. The animation is lovely, because- hey- it’s Disney, but the 3D is nauseating in places. Near the beginning of the movie, Dusty is flying around as you’re in his point of view through twists and turns, which sounds fun in theory, but in 3D, nothing ever seems to come in focus and it can cause motion sickness. Sadly, the 3D was a problem for most of the film, as if the planes were moving faster than your eye could keep up with and so it always seemed slightly off. The “bad guy” of the film (not including the fire), was Cad Spinner. He isn’t so much bad as he is ignorant, self-absorbed and annoying. E said he was “not very fun to watch.” Bad guys should always be bad and they should always be interesting to watch: Darth Vader, Lord Business, Ursula the Sea Witch- all so great at being evil.

While Dusty is in training, the lead ranger is injured and his second in command has to take over, which is Windlifter (the beautifully voiced Wes Studi), who always knows the way the fire will move, even before the reports come in on the radio, and is great at his job. He is also pigeonholed into being the Native American who tells old tribal stories, which no one understands. Nobody in the film can seem to comprehend what he is talking about and, because of their inability, they make him the butt of their jokes. It’s clichéd, tired and something I would have hoped that Disney would be above doing. I was wrong. E commented that he didn’t understand why Dusty and his friends laughed at Windlifter, since he was always right, they “should really just put on their listening ears.” From the mouths of babes.

There are 2 strong female rolls in the movie. Dottie and Lil’ Dipper. Dottie is Dusty’s mechanic and while she is called “the best” after giving Dusty the news that he will never race again, she is talked over while trying to give him the news. Nearly a dozen times, she tries to talk to Dusty and his friends, but they repeatedly dismiss her. She even calls Dusty out herself saying “you’re not even listening to me.” It went from being ‘I’m not listening to news I don’t want to hear’ to being rude.

When Dusty leaves town to get his firefighter training (which you would think he would need to be in good condition to become a firefighter, but apparently not), he meets a new plane, which is a lady firefighter named Lil’ Dipper. While she is completely competent at her job (which is nice), she is also portrayed as somewhere between a rabid fangirl and stalker, having followed Dusty’s career in racing. Nearly jumping him at their first hello, peeping in the window to watch him sleep at night, calling every occasion they are near each other a “date”, putting her wing around him.

Let’s just say there is a lot of unwanted affection coming out of her and it accumulates after the final climax when ((((((((SPOILER ALERT)))))))))) Dusty has just woken in the hospital after a very bad crash and he’s told that Dottie never left his side and instead of a heartfelt thank you from Dusty or her telling him how glad she is that he is okay we get the super close, whisper talk “I like watching you sleep.” Yep that’s not creepy at all. The boys are seen as big, brave, smart, worth listening to (unless you’re Windlifter) and in check of their emotions. The ladies are depicted as juvenile, needy, dumb, stalkers who never have anything valuable to say. When a six year old leans over to you in the movie and says “Dottie’s funny, but kinda scary. I’m glad girls I know aren’t like that” you may have produced a mockery of a woman, not a real woman.

This film is on par with Aladdin 2 and 3 and should have been released direct to video as those movies were. Disney’s new infatuation for the sequel is not panning out for them and I’m ready for them to realize that this is not a relationship worth persuing. While I am sure I will see this at least once more in the theater (because E’s little brother M wants to see it too), and I’m sure that he will love it as well (because, let’s be honest, fire), I am not looking forward to the rewatch.

Your kids will love it if they also loved Cars and Planes. It’s lovely to watch and has a great bravery message but like Cars 2, it’s also a completely unnecessary film.