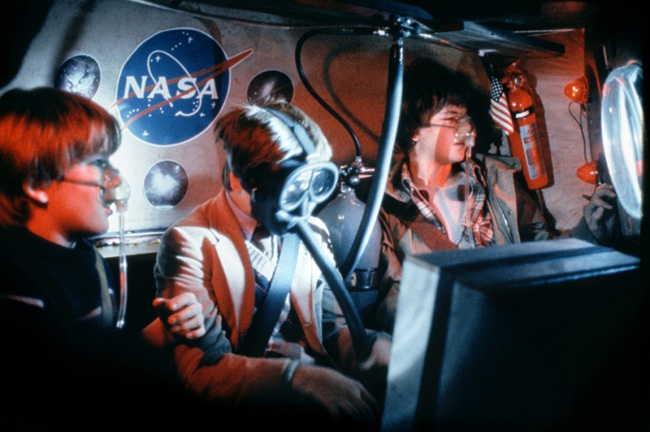 Yes, Paramount is remaking one of my favorite 80’s film, ‘Explorers‘. You know the one where a young Ethan Hawke, River Phoenix, and Jason Presson built a spaceship out of an old tilt-a-whirl carnival ride? Yes that one. It is still one of my favorite movies and is one of the big reasons I got into science, space and film. Everything about the movie spoke to me as a kid, and I wanted so desperately to build a spaceship after watching that film.

I know there is has been talk around the Hollywood water cooler about this remake since another spaceship/time-travel 80s movie is being remade (which is ‘Flight of The Navigator‘).  This 21st century version of ‘Explorers‘ will be produced by Josh Appelbaum and Andre Nemec, the writers behind ‘Mission Impossible: Ghost Protocol‘ and has hired writers Geoff Moore and Dave Posamentier to pen the script. Geoff and Dave wrote and directed ‘Better Living Through Chemistry‘, starring Sam Rockwell and Olivia Wilde, and opens up soon in theaters.

‘Explorers‘ back in the 80s didn’t do so well at the box office. It was directed by Joe Dante who directed ‘Gremlins‘ with Spielberg and had an amazing story. But a lot of people thought that the third act of the film where the kids did indeed venture into space and came into contact with an alien ship to find out the aliens were teenagers themselves and sang Little Richard songs, people thought it jumped the shark.

The details are being kept under wraps for the time being on the remake, but I can imagine that it will be set in modern times (although I wish it were still set in the 80s.) And it will focus on some teenagers building spaceship from something they found in the junkyard and finding aliens. The Little Richard song and dance number might be left out though.

I sure hope this is good.