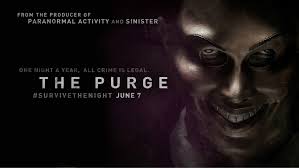 Blumhouse Productions and Universal have announced that the sequel to last year’s hit ‘The Purge‘ is NOT titled The Purge 2. Instead, it is titled ‘The Purge: Anarchy‘. They have released that information with a short trailer that is being rated and we will bring to you soon! The original writer-director James DeMonaco is back and Frank Grillo is starring next to Michael K. Williams, Zach Gilford, Carmen Ejogo and Kiele Sanchez.

Actor Zach Gilford gave us a lot of information about the plot saying “With the sequel, I thought they had a really great way to do a sequel because the first one took place in an upscale suburb with what happens to a family there when their security system doesn’t work. With this one, theres none of the same characters, but it’s the same day of the year and it takes place in the city where there are no security systems and it’s just like a war zone, where people are just trying to survive. So I thought it was pretty interesting to take that concept and to look at it from a different angle.”