The CW Is Bringing Us ‘iZombie’!!!

I love network television in the fall. The big reason for that is the introduction of dozens of new pilots hopeful of being selected for series orders. One of the hottest networks is The CW. While still relatively young, The CW zeros in on the 18-34 age-demographic with proven success. Fresh story telling and unique scenarios are their calling cards. Hoping to join the ranks of such proven program favorites like ‘Supernatural‘, ‘The Vampire Diaries‘ and ‘Smallville‘ are several projects.

One of the most hyped projects comes from the creative minds of Rob Thomas and Diane Ruggiero, A dramatic formulation of the DC comic, ‘iZombie‘. Thomas brought us ‘Veronica Mars‘ and is also working on the spinoff digital series that the network will carry. ‘iZombie‘ features characters created by Chris Roberson and Michael Allred. The quick synopsis is this, a med-student-turned-zombie gets a job with the coroner’s office to secure access to the brains she must consume to maintain her humanity. However, with each brain, she inherits the corpse’s memories. Working with her medical examiner boss and a police detective, she solves homicide cases to help drown the disturbing voices in her head. Thomas and Ruggierro are executive producing with Danielle Stokdyk and Dan Etheridge. 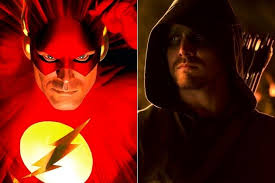 While DC hasn’t gained the overwhelming success in the film world like Marvel has, they do seem to have found their niche with TV serials. ‘iZombie‘ marks the fourth network series this season with ‘Gotham‘ at Fox, ‘Constantine‘ at NBC and ‘The Flash’ back at CW. Zombies have been a fan favorite for a long time, but they have a wider following with the crazy successful ‘The Walking Dead‘ at AMC. NBC is jumping into the undead world with ‘Babylon Fields‘. A&E is remaking the French drama, ‘The Returned’, and ABC is offering a midseason series ‘Resurrection’. Personally, I’m sick of everyone jumping on the band wagon with what is hot. Do you know how much of a tool I felt like typing out the description of ‘iZombie’? Cookie cutter television programming is not what I want the future to hold.

Besides the zombie title heading to The CW, there is a pilot order for the drama ‘Identity’ which tells the story of a young woman that is, by crazy events, connected to a powerful family that the CIA wants her to infiltrate and spy on. ‘Jane The Virgin’ gives us the tale of Jane, a religious girl who, due to outrageous events, is accidentally artificially inseminated. Seriously?! Joining those are ‘The Flash’ and a ‘Supernatural’ spinoff titled ‘Supernatural: Tribes’ directed by Robert Singer (‘Midnight Caller’, ‘Lois & Clark: The New Adventures of Superman’.

I’m interested in giving all of these at least a cursory glance when they debut. I get tired of copy-cat television and films, but I find myself surprised about how I get involved in some of those same stories. Hopefully premiere-season will give me a new lot of shows I watch in the coming years.