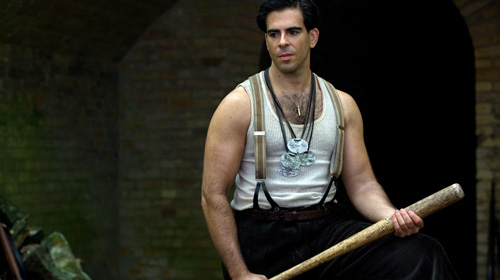 Eli Roth is an actor I look at and instantly think ‘That’s the Bear Jew from ‘Inglorious Basterds!’ Imagine my surprise when I learned I know more of his work that he directed, produced or wrote. I love movie trivia and I totally missed this one! Having said that, he’s got a new project in the works.

Having taken a six year gap between filming ‘Hostel: Part II‘ and ‘The Green Inferno‘, he is moving on to his next venture rather quickly with ‘Knock Knock‘. Roth is co-writing the script with ‘Aftershock‘ colleagues Nicolas Lopez and Guillermo Amoedo.

Roth will produce with Colleen Camp (that’s a name I haven’t heard in a long freaking time!), latest seen in ‘American Hustle‘. The rundown sounds like a simple setup, but it’s not something we’ve seen in a long time. Two young girls show up unexpectedly at the home of a married man where they seduce him and wreak havoc on his quaint life. With this being a horror movie, I can only imagine what kind of chaos they exact. I’m curious to see this one.

Now that I’m looking into Eli Roth, I’ve discovered a ton of movies of his that I knew, but somehow missed they were his. Not only the ‘Hostel‘ series, but ‘Cabin Fever‘ and co-wrote the under-rated Russell Crowe project ‘The Man With The Iron Fists‘. Roth is currently attached to direct the Dracula movie for the WB, ‘Harker‘ with production on ‘Knock Knock‘ to start production in April.