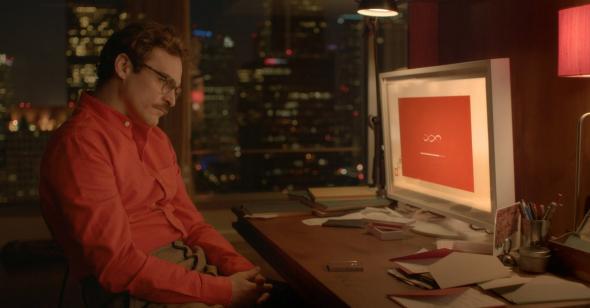 Usually, the month of January is reserved for films that tend to fall below the less than average category, and are almost always immediately forgettable and tend to leave a bad taste in your mouth like a caramel onion. However, with Spike Jonze’s original and fresh tale on the age old story of finding love in the most unlikely place, ‘Her‘ might be the one of the best films not only to be released in January, but in the last few years. I have no doubt that this beautiful and smart film will win tons of awards as well as make a decent sized dent at the box office by word-of-mouth.

‘Her‘ could take place next week if needs to, as we are set in the not so distant future where more and more people are living in luxury high rises, and having all of their information brought to them in the form of a tiny computer no bigger than a credit card with one hell of an operating system. The film follows Theodore (Joaquin Phoenix), a good man who is recently divorced and can’t muster up the energy or courage to ask anyone out since his breakup. But that doesn’t stop him from performing well at work or spending time with his friends. He’s a jolly guy, but deep down he is very lonely, as he sits in his colorful apartment alone playing a virtual reality video game with a foul-mouthed character.

He purchases a new operating system, which is billed as having a great artificial intelligence chip added. Once he installs this into his computer and picks a female voice (Scarlett Johansson, AWESOME), it’s as if he is talking to a real live person who is by his side at all times. Not to mention this operation system who now goes by Samantha, knows everything about Theodore and begins to know what he needs, loves, and hates. And in our time of people falling in love with their electronics and people spending their spare time on a computer by themselves, rather than with other humans, it’s not so difficult to see how one very alive man can fall for an electronic voice, especially someone who is very lonely. 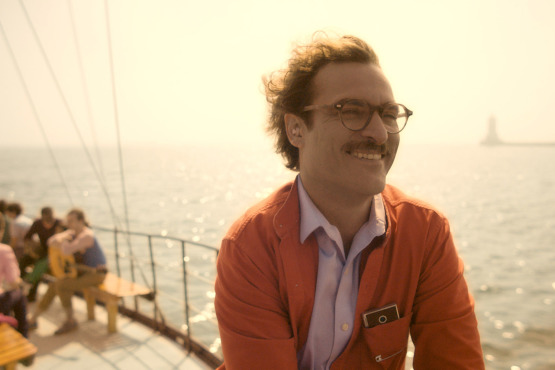 Jonze answers most questions we would have about this not-so-far-off future and the ins and outs of having a serious relationship with a computer. Such examples are, How do they have sex? Another one might be, Is this operating system in love with anyone else, as I’d assume other people have bought this operating system? Can Samantha see and hear Theodore at all times? The way Jonze shows the answers to these questions is brilliant. It’s a true love story with a different outcome than you’d expect. ‘Her’ touches on all the emotions, while Samantha begins to experience the same. And Theodore is his own worst enemy and tries his best to not let his past or his depression get in the way of something great.

Phoenix does an incredible job as Theodore, as from the moment we meet him, we instantly like him. His mannerisms, his easy-going attitude, wit, and charm go a long way here, and we can’t help but root for the guy. I’d want him as a friend. And Johansson is flawless here, but we never see her, but only hear her voice. Now, I wouldn’t be surprised if Johansson got an acting award for her voice work here, as it is the best I’ve ever seen and heard. Her delivery will make you think she is actually there in the room, experiencing every feeling. It’s truly remarkable.