This last episode of ‘The Walking Dead‘ left us with the Governor watching Rick and Carl from behind a tree. We all knew he wasn’t dead so lets get to what he was doing since the slaughter. The beginning of the episode is a flashback or what has happened to him since the end of the last season.

The Governor is sitting at a campfire at night with tents around him. I believe this is the night after the slaughter.  A female walker come up on him and falls into the fire. He doesn’t move as she gets closer to him. A gun goes off to kill her and you see Martinez is the one who shot her. Morning comes and the Governor gets out of his tent. He looks around and all the tents are gone. Im guessing everyone abandoned ship. It looks like they were camping where the old pits use to be. You see him driving through the gates of Woodbury and the town being on fire. We now know that he torched Woodbury after the slaughter in a “if I cant have it, no one can” deal.  During those scenes, in the background,  he is talking to a woman about how he was on his own for a few months and that he was the last survivor of Woodbury. He tells her that the “man in charge lost it”. He now has longer hair and a beard. He falls while he is walking and looks up to see a girl in the window and a food truck parked outside. Its now night time and he is walking through a hallway that people are obviously living in. He enters into a room with two women, a man and a child.  These are the people who he is telling his story to.

He is done telling his story and now talking to them about staying for the night. The building that he is in is an apartment building.  You can tell that the Governor is now a shell of his former self. He is non responsive and in a daze while sitting at the table with these ladies. He looks like “Forrest Gump” after her ran around the country. One of the ladies is a former Atlanta police officer, so you are guessing that he is around the Atlanta area. The people in the apartment is a small family. Dad is on an oxygen tank. They are going to hold his guns while he is there for the night. When they ask what his name is, he says its Brian Heriot. He saw that name on the side of a building while he was walking. I believe that he is now trying to break away from his old life. 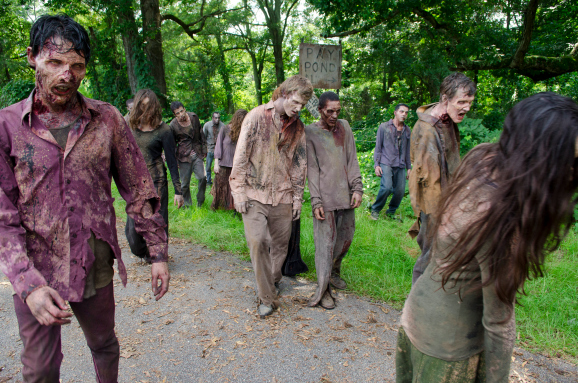 In the other apartment, he is eating when one of the sister, Lily, walks in. She is giving him a bowl of noodles. He tells her thanks and dumps the food outside the window. He goes back to eating, which looked liked cat food to me. The family is in the other apartment chit chatting and playing games. The Governor tries to put his plate by their door, but Tara, the ex officer, gets onto him and tells him to wash his plate. Lily invites him to sit down and he sits in front of the TV. He looks at his reflection in the screen. The sisters are telling them about their life and what happened. Lily was a nurse and worked at the hospital, the dad drove a food truck, and Tara was a cop. The dad picked all of them up, including the little girl from school, and brought them back there to his place. The Governor helps the old man to bed. The man talks to him about having kids. He wants him to go upstairs and get an old backgammon set for the little girl, Megan. She has quit talking and the man thinks this will help her. The man makes a comment about how the Governor has been in the outside world and can handle the walkers. This family has not left that apartment building since the apocalypse broke.

The Governor goes to the upstairs apartment to get the game.He also gets some bullets. He hears a noise in the bathroom and sees two fake legs on the floor. The walker torso is in the tub. He stabs the walker in the head and takes the gun the man used to kill himself with. The Governor brings the game back and goes to his apartment. He pulls a picture out of his wife, daughter and himself. He pulls the corner down over his face. The next morning, Lily comes in and sees the picture. She brought some stuff for him for the road. She tries to hand him his gun and he refuses it. He tells her about having the gun from upstairs. He also tells her that you have to shoot them in the brain to kill them. She tells him that their dad is about to die and she wants him to get a tank from the old folks home  to keep him alive for a few more days. I’m starting to think these people are super demanding. The Governor is obviously not wanting to help, but does it anyways.

So now the Governor is fetching an oxygen tank in an old folks home. At this point I’m not sure if I should call him that or “Brian” now. He encounters some walkers in the home. Ones stuck in wheelchairs or in their beds. One begins to walk towards him and he shuts the door on her. He finally sees a cart of tanks and he makes so much noise that the walker orderlies go after him. He freaks out and runs away with only two tanks. He only shoots at one. Its pretty bizarre to watch him now compared to last season. It looks like he has had a conscience break,  just like Rick did.  He brings back the tanks and goes to the adjoining apartment. The oldest one goes to help him with the wounds he got from running. Shes happy to help him. She says that “no one ever told her how boring the end of the world is going to be.” She tells him that Megan, the youngest, thought “Brian” was her dad. The oldest is Megans mom.  Megan comes in and is to watch him while her mom gets more ointment. She asks about his eye. He tells her that he promises to tell her if she can keep it a secret. They pinkie swear and you can see him opening up. He tells her that he got hurt by trying to protect someone that he loved. She asks if they got hurt too and he says yes. Its at this point that you realize that his pre-break personality is coming out. 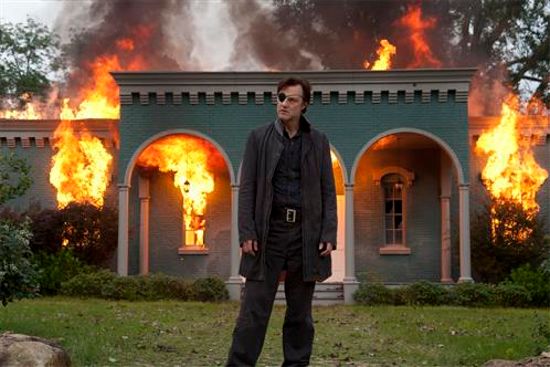 He is now teaching Megan how to play chess. He also was had a haircut and his beard is gone.  He is keeping her occupied while her grandfather dies in the next room. He is telling her that you can lose a lot of pawns and still win the game. The king is the guy you want to capture. She puts an eyepatch on the king and tells him he looks like her. Some time has passed and the game is going on. Megans grandfather is now dead. Everyone is gathered around the body. “Brian” is trying to get them out of the room. The man comes back as a walker and grabs Tara. “Brian” goes a little crazy and smashes his head with the oxygen tank. “Brian” and Lily dig the grave for the man and when they get back, Megan runs from him. Tara is talking about how he almost got her and grateful her dad would be to stop him. “Brian” is now cool with Tara. He goes to his apartment and burns the picture of his family. “Brian” tells Lily bye and she wants them to go with him. She wants to go somewhere where they can have a life and be safe. The four of them are now in the food truck traveling. Tara lies about being a cop. She asks if they are going to get “there”. He says yes. They stop and Megan is still avoiding him. Night falls and Lily and “Brian” are getting cozy. They start to make out and they worry about waking them up. The truck breaks down and now they are walking. We now find out that Tara is a lesbian. Tara falls and hurts her ankle. They spot a group of walkers and Megan freezes. She eventually runs to “ Brian” and he carries her away. Everyone is running and both “Brian” and Megan fall into one of the old fire pits. He is killing the walkers inside the pits and you hear machine guns going off. “Brian” kills them in a very gruesome manner. Its pretty disgusting what he does.  Megan is in shock and he promises her that he will always protect her. He has now bonded to her like his own daughter. Martinez walks up on the tent and is shocked to see him there.

So…..The Governor..”Brian”..The Governor, its almost like Dr. Jekel/Mr. Hyde. Has he changed his ways and gone back to a pre Woodbury man? Is he really just wanting to move on and leave the past behind? Personally, I really have no clue. Obviously, the potential is there for him to take over a group and revive his plans of apocalyptic world domination. The next few episodes will show us exactly how much he has changed. Let me know what you think.