Robert Rodriguez begins production on “FROM DUSK TILL DAWN: THE SERIES”!!! 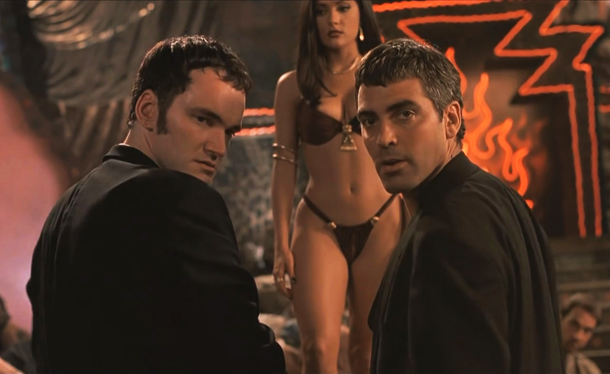 I get really sad when excellent film makers make really substandard movies, or in the case of Robert Rodriguez, entirely unoriginal tv shows. The show I’m lamenting is a TV version of From Dusk Till Dawn. It COULD be a good idea. When you have something as epic as the movie already in your stable, why turn that into a series? If you’re Robert Rodriguez, you’re hoping your fan base will follow the series to your new El Rey Network which is set to go live this December. Rodriguez is directing the first 2 episodes of the vampire blood-fest.

Of course the Gecko Brothers are NOT going to be George Clooney and Quentin Tarantino. Instead D.J. Cotrona, of G.I. Joe: Retaliation fame will be Seth. and Richie will be played by Zane Holtz who had a part in The Perks of Being a Wallflower and on ABC Family’s Make It Or Break It. Don Johnson will return to the small screen as Sheriff Earl McGraw. That character name should ring a bell with any devotee of Robert Rodriguez’s or Quentin Tarantino’s films as having been in a string of their movies played by Michael Parks.

The good news or the bad news depending on how you look at it is that the series will not be related to the three From Dusk Till Dawn films. It’s a good thing because it frees Rodriguez up artistically to take other directions with the characters. It’s a bad thing because we are being introduced to a lot of the same characters as from the movies….and the same story line from the first movie. I mean the same story line. The Gecko brothers are running from the law after a bank robbery turned bad. The brothers encounter a former minister and his family traveling in an RV. The group ends up at a strip club that is populated by vampires. We’re going to get a few new characters and deeper mythology of the vampires.

“If the movie’s the short story, the series is the novel,” states Rodrigues, adding, “We have assembled an amazing cast and crew, and viewers can expect to be part of a wild ride when the series premieres on El Rey Network next spring.”

I loved the first movie. I’m not hopeful that this series can do anything but kill everything that’s good about the movie. I know Robert Rodriguez has some amazing ideas left and I want to start seeing those. With his own network beginning I’m hoping it’s not going to be a re-hash of a good movie after another.