‘From Dusk Till Dawn’ Will Now Be A TV Series with Robert Rodriguez’s Help!! 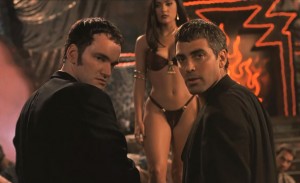 Univision Networks has announced that it will spawn a new network called the El Rey Network, which will be led by Robert Rodriguez and John Fogelman. El Rey will start towards the end of the year through Comcast, while Univision will handle the sales and distribution aspects. Rodriguez, who directed the ‘Spy Kids‘ films, ‘Sin City‘ and ‘Desperado‘ has just announced that one of their first shows that will air on the new El Rey network will be a TV series adaptation of one of his first films ‘From Dusk Till Dawn‘, which was written and worked on by his good friend Quentin Tarantino.

‘From Dusk Till Dawn‘ starred George Clooney, Tarantino, Juliette Lewis, Cheech Marin, Danny Trejo, and Harvey Keitel back in 1996 where Clooney was fresh off of ‘ER‘. The film about bank robbing, murdering brothers who stumble across a Mexican bar full of blood sucking vampires wasn’t exactly a hit at the box office, but over the years has proved one of the biggest and most successful cult films of all time. It even spawned a few sequels with such stars as Bruce Campbell and Robert Patrick.  And if you remember the end of the original film, the camera pans back to reveal a multi level large tomb where it looks like more creatures and tons of humans have died over the past thousands of years, which could lead to tons of story lines. 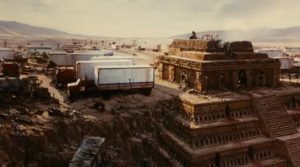 Rodriguez will be involved with the new series, but his role is not yet determined as is the premise of the series yet. Maybe they will focus each season on a new set of survivors from a different time period. Or they could just keep the story going from where the last one left off.  I’d personally like to see a new group of survivors end up at that location and meet their grisly doom each week.  i only hope to see some familiar faces in the new show as well as the support and work from Tom Savini.

What are your thoughts? Would you like to see the remaining Gecko brother return to fight vampires?