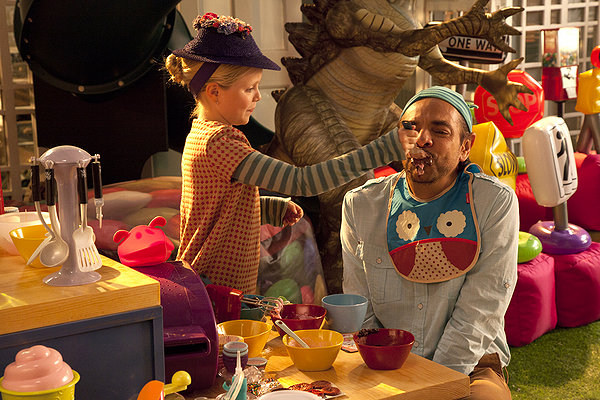 ‘Instructions Not Included‘ is an irresistible charmer directed by Eugenio Derbez, who also stars in the film. He plays Valentin, an irresponsible ladies man who is suddenly forced to care for Maggie, the infant daughter he didn’t know he had.

Valentin is accustomed only to the superficial pleasures that life in Acapulco has to offer, namely pretty tourists. When one of them shows up at his doorstep, hands him the infant, and runs away, his first impulse is to track her down in America and give the child back. This takes him to Los Angeles where the mother is nowhere to be found. Along the way, though, he falls in love with the little girl and decides to keep her.

By chance (or plot contrivance, if one wants to be picky), Valentin saves baby Maggie from a near-tragedy in a heroic display of bravery – right in front of a film producer who just happens to be looking for a stunt man. Bang-zoom, an undocumented immigrant lands a job making $10,000 a day as a stunt man in Hollywood.  Only in the movies, right?

The film is rife with these sorts of contrivances but there is such a joyful, vibrant silliness to the proceedings that such things are easy to forgive. In fact, the tone of the film is so alive with audacious broad comedy that only the most heartless grump could resist getting caught up in its charms. 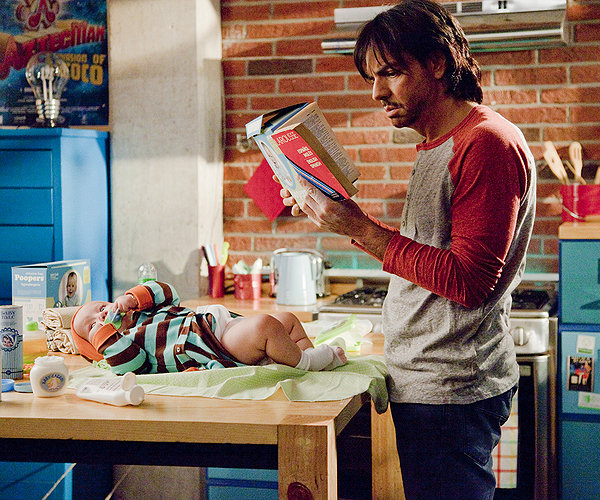 Derbez employs some wonderful flourishes of whimsy throughout the film, including delightful animated sequences that are made with felt fabric figures enjoying all manner of adventures, the home he has built for the little girl which looks like the world’s greatest toy store, and memorable supporting characters who seem utterly (and thankfully) oblivious to any cross-border politics that might’ve appeared in a less tender-hearted film.

As we get to know Valentin and Maggie (now school-aged) in the life they’ve built together in L.A., the laughs are fast and plentiful, until a dramatic twist (ala ‘Kramer vs. Kramer‘) creates a jarring effect that could give one emotional whiplash. Fortunately, the film doesn’t dawdle in this territory too long.

The performances all shine, especially that of Loreto Peralta who plays young Maggie. Her guileless charm is essential to the film’s success. Other stand-outs include Jessica Lindsey who plays the long-lost mom, a role that could’ve been overly demonized but is played with a fair amount of depth and sensitivity.  Derbez himself gives a wonderful performance, part Wile E Coyote and part loving father, his wide-eyed sad-sack expressions take the audience with him on a heartfelt journey that will ultimately require a hanky or two. Be prepared.

‘Instructions Not Included‘ is a delightful, albeit uneven, sweet-natured movie that celebrates imagination, love, and loyalty.