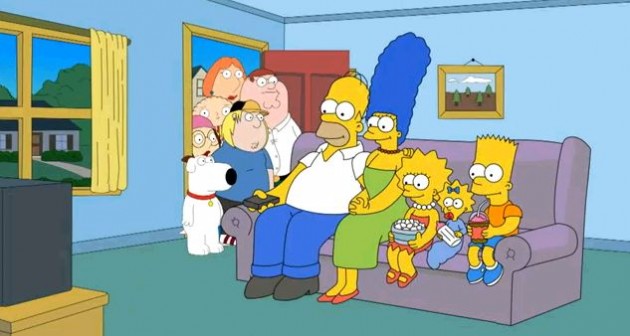 Maybe a trick to draw huge ratings, the executives at Fox have announced that in the Fall season of 2014 of the Animation Domination Sunday lineup, ‘Family Guy‘ will feature an episode that will have the Simpsons cast. We are told that the Griffin family will leave their town of Quahog and venture to Springfield, where they will meet Homer Simpson and the rest of the Springfield civilians.

Oh man, think of the possibilities. Peter Griffin going to Moe’s with Barney and Homer? Chris and Meg playing with Lisa, Bart, Milhouse, Nelson, and Ralph? Lois and Marge husband swapping? The possibilities are endless. New episodes of the Animation Domination shows will start September 29th with ‘Family Guy‘ starting its 11th season and ‘The Simpsons‘ in its 25th season.

Can’t wait for this.