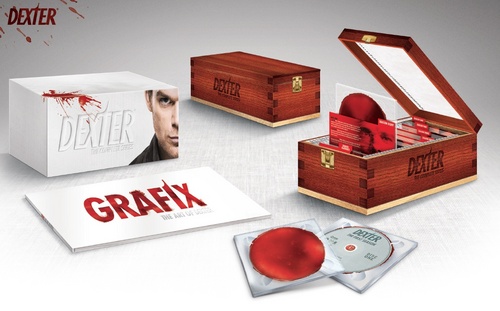 Yesterday, the cast and crew of Showtime’s ‘Dexter‘ had a packed house over at San Diego Comic Con and talked about the show’s final season and how everyone still hasn’t processed that the series is actually ending. However, they did reveal that a complete ultimate edition of the series, which will include all eight seasons will be released on blu-ray on November 5th of this year.

And by the look of it, the set will definitely be one to own. For it looks like a wooden box, filled with Dexter’s blood slides he keeps from all of his victims, with each individual disc acting as a separate blood slide. Not only that, the entire box will be incased in a dummy head, which Dexter uses ever so often to determine blood splatter. I love that networks and studios are doing these types of things.

I’m not sure if there will be any new extras on the set, but rest assured, this will be the collection to own.