Blu-Ray Review: ‘The Perks of Being A Wallfllower’!! 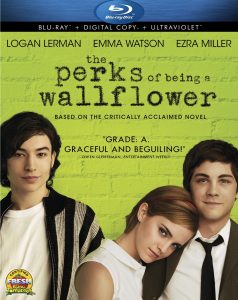 ‘The Perks of Being A Wallflower’ is hands down one of my favorite films of the year.  I haven’t seen such a genuine coming of age high school movie since the late John Hughes was making his films about being a teenager.  Director and writer Stephen Chbosky hit a home run with  ’The Perks of Being A Wallflower’.  I haven’t fallen in love with characters like this since HBO’s ‘Six Feet Under’ was on television.  I did not want this film to end.

Chbosky wrote the book,  ’The Perks of Being A Wallflower’ and ended up adapting it himself into a film and took on the role of director, which is a very rare thing.  I must say that Chbosky did a great job with his own story and characters.  I really bonded with this film.  The film is set in the 80s,which is maybe an homage to the John Hughes high-school films of that time, and we follow Charlie (Logan Lerman), a high-school freshman who is an avid reader and exceptional writer, yet he is lacking in the friends department.

Charlie comes from a great family, but has a had a bit of of a rough childhood, with his aunt passing away when he was young, which still haunts him in present day, and the recent suicide of his best friend.  Charlie comes across as your average teenage freshman as he tries not to be noticed in the hallways and does not participate in class, even though he knows every answer.  Charlie just wants to fit in.

Charlie narrates the film and describes his first day of high-school as , “there are only 1305 days left of high-school”.  He makes one friend in the form of his fun and charming English teacher Mr. Anderson (Paul Rudd), who knows how smart Charlie is.  Charlie even starts reading unassigned books given to him by his english teacher and writing book reports for extra credit.  This is Charlie’s life, until he meets to other students, Patrick (Ezra Miller) and Sam (Emma Watson), two high-school seniors who are half siblings.

Patrick is a flamboyant gay teenager who is funny, kind, and full of love.  Sam is a girl every guy in high school wants to know.  She loves the Beatles and the Smiths, and doesn’t care what people think about her.  The three instantly become inseparable, as they share their passion for music, theatre, and joy rides around the city.  Sam and Patrick even introduce Charlie to their friends Mary Elizabeth (Mae Whitman) and Alice (Erin Wilhelmi) who take him under their wing.  Charlie attends his first party and eats his first pot brownie with these people.  And he soon falls in love with Sam, who is always in a relationship with the “wrong” guy, which Charlie lacks the courage to tell Sam how he feels about her.

Every character is though through and given the proper treatment on screen. Lerman does an amazing job at being a very tortured soul who is looking for acceptance and love.  Watson does an amazing job in this film.  She is the ultimate and coolest girl on the planet in  ’The Perks of Being A Wallflower’.  I wish I knew a girl like this when I went to school.  This is a great turn for Watson from the Harry Potter series.  Miller steals the show in every scene.  He is hilarious and does a good job of making the audience love him. He is a true friend.  Everybody did a great job on this film including the cameos by Dylan McDermott, Kate Walsh, Melanie Lynskey, Joan Cusack, and Tom Savini.

On a personal note, I hugely loved the scenes in this film involving the ‘Rocky Horror Picture Show’.  Mary Elizabeth leads a her friends, which include all of Charlie’s friends in a weekly midnight showing of the ’Rocky Horror Picture Show’, where they all act out the roles live in front of the movie screen.  Even Charlie gets in on the action.  I loved this as, this was my Saturday night ritual every weekend in high-school. 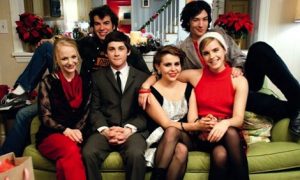 ‘The Perks of Being A Wallflower’ comes with a decent enough 1080p HD transfer is presented in 1.78:1 aspect ratio. Oddly enough, this movie was filmed in Super 35mm, which is cool, but the detail here isn’t all the well defined. The entire image looks very soft as if it were filmed with a cheaper camera. Parts of the movie, especially in the school interiors, things look a bit brighter, but has a hazy look as if we are in a fantasy film. Now, there isn’t any grain really here, it’s just that everything looks soft and not richly detailed. Maybe they wanted the old nostalgic feel of the 80s to the film as it takes place in that time period. At times, during the well let scenes, some of the finer detail does come through, especially in closeups, defining facial hair and stitching in clothes. The colors are very warm, but seem to create are very inviting experience with browns, greens, and blues. Black levels also run deep and inky here. Overall, the image looks nice, but I expected something sharper. That being said, I’m glad that the soft palette was here for nostalgic purposes.

This release has a lossless DTS-HD 5.1 audio mix and does the job for what it is. Contrary to the opening DTS logo and sound promo, which is amazingly robust, the film does not sound like that. This is a dialogue centric film and is very light on everything. The dialogue is always crystal clear and easy to understand with no evidence of cracks or hissing. The score and impressive song soundtrack do play louder, but still feels a bit softened. Even during the dance and party sequences, the noise level is below what it should be. The sound effects and ambient noise pop up from time to time with people chattering, but not much. On the whole, this is a very soft-spoken audio track, considering this is in DTS-HD, but still sounds very nice. 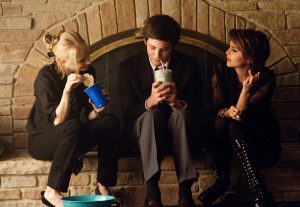 ”The Perks of Being A Wallflower’ was in my top 3 favorite films of 2012. And it remains one of my favorites of all time. I haven’t seen a great high-school movie like this since the glory days of John Hughes. The characters, acting, and story are perfect. I want to be friends with these characters for life. The video and audio presentations are okay, but get the job done and add that nostalgic feel of the 80s to your viewing experience. The extras are decent with some amazing commentary tracks. I highly recommend this movie and blu-ray to everyone. A MUST OWN!