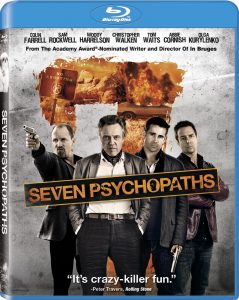 The film’s center is Marty (Colin Farrell), an Irish Hollywood screenwriter and major alcoholic, who is working on his latest screenplay called ’Seven Psychopaths’.  Unfortunately the only thing he has written for this project is EXT. LOS ANGELES STREETCORNER. DAY.  Marty’s best friend Billy Bickle (Sam Rockwell) tells him about a killer going around murdering people with ties to the mafia, which we see in the first scene of the film as a masked man comes up behind two mafia hit-men (Boardwalk Empire’s Michael Stuhlbarg and Michael Pitt) and shoots them in the back of the head and leaves a couple of Jack of Diamonds playing cards on their body.  (‘Boondock Saints’ immediately popped into my head.) This gives Marty immediate inspiration for his screenplay.

Meanwhile Bickle’s friend and work associate Hans (Christopher Walken) run a dog-napping operation, where they snatch up dogs from rich local people and return the dog for a reward.  They just happen to take the wrong dog.  That dog is Bonny, a pampered Shih Tzu who belongs to Charlie Costello (Woody Harrelson), a sadistic and insane crime lord.  Costello has an unnatural love for his dog and will stop everything and do anything to get his beloved dog back.

In addition to this, Bickle secretly places an ad in the newspaper which says to contact Marty if “You are a Psychopath, and you have a good story.”  Here is where Zachariah (Tom Waits) shows up, sitting in front of Marty’s house with a pet rabbit in response to the ad.  Zachariah tells Marty his story which involves himself and his wife going on a large killing spree across the US, killing off famous serial killers in brutal ways.  Marty is intrigued by this and adds Zachariah’s story to his screenplay.

Meanwhile, Bickle desperately wants to help write Marty’s screenplay and thus tells Marty a couple of sadistic tales that he could use for his screenplay.  One involves a Quaker (Harry Dean Stanton) who over the course of several decades stalks his daughter’s murderer.  The other involves a former Viet Cong soldier (Long Nguyen) turned monk who plots an epic revenge on the American soldiers who raped and killed his family back in the war.

From here, Costello is out searching for his dog when Bickle, Marty, and Hans head to the desert to make the hand-off to Costello.  Bickle and Hans talk about how they see Marty’s movie playing out while in the desert while waiting for Costello to show up.  We see visions of how the movie will play out and end in their minds, and it just might be a pre-cursor to how the real film plays out…or not.

The film is a cross between a Tarantino film and the movie ‘Get Shorty’.  The dialogue is hip, smart, and very funny.  The violence culminates in an epic B-movie tone, which should satisfy any fan of the genre.  Rockwell does an impressive job as a crazy and energetic friend, especially when he acts out his entire vision of what he wants for Marty’s script.  Woody Harrelson is amped up to 11 in this flick, and is just plain fun to watch.  I love watching Tom Waits in everything he is in.  He brings a certain cool and uncertainty to every role.  This one is no different.  Everyone else does a good job with their role, which might just be amped up versions of themselves.

‘Seven Psychopaths’ is a fun and wildly entertaining film.  You’ll fall in love with these sick and twisted characters and the impressive dialogue.  I highly recommend it.  I hope you have as much fun with it as I did.

‘Seven Psychopaths’ comes with an impressive 1080p HD transfer and is presented in 2.40:1 aspect ratio. The detail is incredibly fine as we can make out the most minute textures in clothing, wrinkles in faces, blemishes on skin easily. The wider shots are just as rich in detail as the closeups are. The colors seem to pop, however we are on the warmer side of the color spectrum with tons of yellows, oranges, and browns. When the blues and greens do pop up, they look amazing. The black levels look very good and are always deep and inky. Flesh tones are smooth and natural as well. There are no compression issue to speak of as well as no evidence of aliasing or banding. This is a demo worthy video presentation.

This release comes with a decent lossless DTS-HD 5.1 audio mix. This is more or less and dialogue driven film with flashes of action and gunfire. The dialogue itself is crystal clear and always easy to understand and is perfectly centered on those front speakers and center channel. The directionality of the voices and gunplay are top notch and always sound full. When some of the bigger action sequences take place, the speakers turn up to 11 and pack a good punch. The sound effects and ambient noise do a great job of filling the surrounds with noise when available. The score and music soundtrack add the suspense and comedy to this film very well without drowning out the dialogue. This audio presentation is nothing really to exciting to write mom about, but it does the job very well. 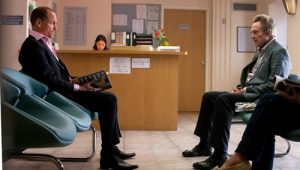 ‘Seven Psychopaths‘ is a fun as hell movie and if you enjoyed ‘In Bruges‘, you will definitely love this film. It’s full of great dialogue, comedy,and some tense situations. Excellent cast and filmmaking all around. The video is demo worthy with the audio portion being decent. The extras were odd and a let down. However, i’m still going to recommend this fine movie as it is, because it’s just too fun to not own. You’ll have a ball with it. Recommended.