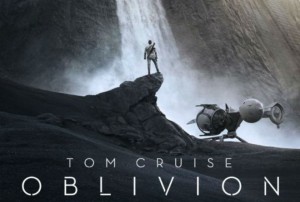 I’m so excited that sci-fi films are back in a HUGE way. Since ‘Prometheus‘, it seems like every big director wants to be in the sci-fi game again. Well, the first trailer we saw a month or so ago for ‘Oblivion‘ didn’t do much in the way a sci-fi film should in making the fans giddy. But this new trailer most certainly does just that. This is on the top of my list this year to see.

Joseph Kosinski is directing Tom Cruise, Melissa Leo, and Morgan Freeman in this sci-fi action thriller, which looks incredible. Freeman never looked so cool in a film before. He sort of reminds me of Morpheus in ‘The Matrix‘ here, while Tom Cruise is our hero of the story playing a guy named Jack. Kosinski is known for directing the ‘Tron‘ remake and let’s hope he can knock this out of the park.

The official synopsis: “On a spectacular future Earth that has evolved beyond recognition, one man’s confrontation with the past will lead him on a journey of redemption and discovery as he battles to save mankind.” That really doesn’t do it justice. By this trailer, it looks so much more than that. ‘Oblivion‘ opens April 19th.  Enjoy the trailer.