Episode 7: When the Dead Comes Knocking

Alright The Walking Dead fans…this is a good episode so lets get to it!!The episode opens with Merle interrogating Glen in Woodbury. Merle brings up the gang leaving him on the roof. Glen tells Merle that T-dog didn’t make it. Merle asks who else is alive. When Glen is silent he asks about Maggie. You see her listening in the next room. Merle then beats up Glen and asks where his brother ,Rick  and where the camp is.

Meanwhile, back at the prison, Michonne stands outside the gate and kills all the walkers around her. She starts to fade and passes out in the grass. Carl shoots a walker trying to get her and draws other walkers to her. Rick goes out and gets her and brings her into the prison. While helping her Rick tries to ask her name. She says she didn’t ask for his help. Daryl brings Rick and the gang to see Carol. They cry and embrace her and she sees on Ricks face that Lori didn’t make it. Carol holds the baby.

In Woodbury, Milton knocks on the Governors door to say that Mr. Coleman is ready. He says he will meet him in the lab. Andrea gets dressed and ready to go to the lab with the Governor .

Rick tell Michonne that he can clear up her wound and send her on her way but he wants to know how she found them. She says that the supplies were dropped by an “Asian guy and a pretty girl”. She says he was taken hostage by the “SOB who shot him”. She told Rick about Woodbury and the 75 people. Tells Rick about how the Governor is a “pretty boy, charming Jim Jones type” She tells him about the wall and how to get in. Rick asked her how she got to the prison and she told him how she heard about the prison and it’s a straight shot. from Woodbury. Rick introduced her to Hershel to take care of her leg.

Merle tells Glen how strong he is and how he is surprised he has lasted this long. Merle asks again where their camp is. Glen says that Rick will get to them and save them. Glen names off the people who are with them, including Andrea. Merle smiles and asks “Really? Is that right?” Glen looks at him blankly.

In the prison Hershel sews up Michonne’s leg while Carl stands guard. In the other room the group discusses going and getting Glen and Maggie. Beth, Oscar and Axel volunteer to go with Daryl and Rick. Michonne asked Beth if this place was overrun by walkers and Beth said yes. Michonne asks by only a few and Beth says that there were others. Rick talks to Carl about Lori and Carl said he had to shoot her. Rick apologized for him going thru that. Carl asks how long he will be gone and Carl says he will be ok. Rick says if anything happens to lock everyone in a cell and take care of his sister. Carl told Rick and Daryl has been calling her “ass kicker”. Carl asked what they should call her and Rick asks what does he think. Carl wants to name her Judith after his 3rd grade teacher. Rick says ok. Daryl tells Carol to stay safe and Hershal tells them to bring them back. All volunteers but Beth leave the prison.

In Woodbury, the Governor takes Andrea to see Mr. Coleman. Mr. Coleman is near death and being spoon fed by Milton. The Governor leaves Andrea with both and tells her that Milton will bring her up to speed and he will see her at dinner. The Governor made sure to tell Mr. Coleman thank you for this. Milton has Andrea cue up the first song on a record playing after he makes a ringing noise on a bowl. Milton then gives Mr’ Coleman his name and tells him to raise his right hand off the bed if any of the following statements are true. Mr. Coleman raises his hand on his name, his wife’s name and his children’s names. He says something to Milton and when Andrea asks what he said Milton replies that he wants the record player on while they wait. 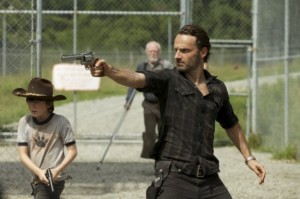 Glen is trying to get out of the chair he is tied to when Merle brings a walker in. He wants to Glen to feel what he felt on the roof. While the walker is near Glen he asks where the group is. When Glen doesn’t answer Merle lets the walker go and shuts the door behind it and Glen. Glen kicks the walker off him and fights him off still strapped to the chair. He breaks the chair on the wall and puts a piece of it into the walkers head.

Back with Mr. Coleman, Milton says that he will let Mr. Coleman die and then reanimate. He is going to ask the same questions and record his responses. Andrea is to kill him after Mr. Coleman responds. Milton is researching base memory after a person becomes a walker and now has the perfect subject since Mr. Coleman is dying of prostate cancer. Andrea asks if Milton and Mr. Coleman are close and he says they listened to music together and hopefully  some of that will stay when he transforms. Andrea informs him that he will turn into a monster and figures out Milton has not seen reanimation before. Mr. Coleman dies and is strapped in.

Merle talks to the Governor and tells him that Glen and Maggie known Andrea but doesn’t know she is in Woodbury. Merle says that Glen does know Daryl and that Andrea and Glen both said that the group went back for Merle. They decide to use Glen for leverage if Rick comes and the Governor goes and talks to Maggie.

He cuts off the tape keeping her strapped in and sits down. He tells Maggie that is she tells him where the group is he will drive her back and say this is a misunderstanding. Maggie wants to talk to Glen and the Governor says no because the group is dangerous. They left Merle to cut off his own hand. The Governor promises the groups safety by bringing them to Woodbury. She is silent and the Governor tells her to stand up and take off her shirt. She said no and he said if she doesn’t he will bring Glens hand into the room. She takes off her shirt and he tells her to take off her bra also. She does and stand there covering her breasts with her hands. The Governor stands up and takes off his belt, walks towards her and touches her hair and smells it. He bends her over the table and when she tells him to “Do whatever he is going to do and then go to hell” he walks away from her.

Rick and the gang pull over a mile from Woodbury. Michonne informs them that there are  patrols and it is better to walk. Rick thanks Daryl for what he did for the baby and Daryl said that is what they do. The group comes across a group of walkers and kill their way thru them. They hid in an abandoned cabin with a dead dog inside stinking up the room. They also found a live crazy man with a gun. He tells them to get out or he will call the cops. Rick says he is a cop and when he tries to calm the guy down and he guy shots at Rick. Rick grabs him and Michonne kills him when he tries to open the door to a huge group of walkers. Daryl, Oscar and Rick throw his body to the walkers and sneek out the back. 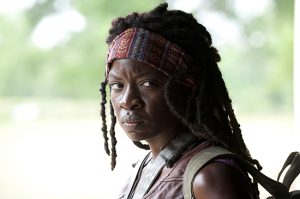 Mr Coleman reanimates and Milton makes the ringing noise again while Andrea turns on the record player. Milton re-introduces himself and goes thru the questions again. During the question about the kids Milton thinks he saw Mr Coleman move his arm and wants to remove the restraints. Andrea tells him no that he will lunge at them and when Milton releases a restraint, Mr. Coleman lunges at him and Andrea stabs him in the head. Milton leaves to record the findings

Merle goes back to Glen and the Governor brings in Maggie. When Glen brings up a weapon they tell him to drop it. The Governor says that he is thru with games and one of them will give up the camp. When the Governor points the gun at Glen, Maggie discloses that the group is at the prison. The governor is shocked that 10 people cleared the prison in the red zone and did something that could not be done. The Governor walks back to Maggie and hugs her then throws her to Glen.  Milton says there is no way that could have happened and the Governor looks at Merle and says either she is lying about the group  or they did something that couldn’t be done. Meanwhile, Rick, Darrell, Michonne and Oscar sneek up on Woodbury in the dark.

The Governor tells Merle that his brother is out there with them and that blood is blood and makes him wonder where Merle’s loyalty lies. Merle says his loyalty is with the Governor. The Governor then sends out a group to check out the prison. Andrea comes back to the governor after Mr. Coleman died.The Governor said that she kept his word about coming back and asked about Mr Coleman. Andrea said he died and Milton did not find what he was looking for. She turns and puts her head on his chest.

This episode shows who the Governor really is and lays out the beginning of Rick vs. the Governor. It also shows how Glen really stepped up and became a man in the zombie apocalypse. I’m still not 100% sure about Michonne. I would be really interested in knowing some of her background to explain why she is the way she is. Tell me what you think folks. Let’s get a conversation going.