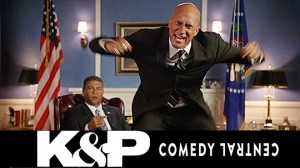 Good news “Key & Peele” fans, it looks like  COMEDY CENTRAL’s sketch comedy stars Keegan-Michael Key and Jordan Peele will star in a third season on the comedy sketch show.  The third season will be 13 episodes long and will premiere next Fall. Kent Alterman, Head of Original Programming and Production of Comedy Central said, “Since Obama won re-election, it only seems fair that we would give ‘Key and Peele’ another season.”

Key and Peele went on to say, “We are so thrilled about the pick-up and want to thank COMEDY CENTRAL for FOUR MORE YEARS! Oh wait, what’s that?  One more year?  Oh….ok, that will work too.”