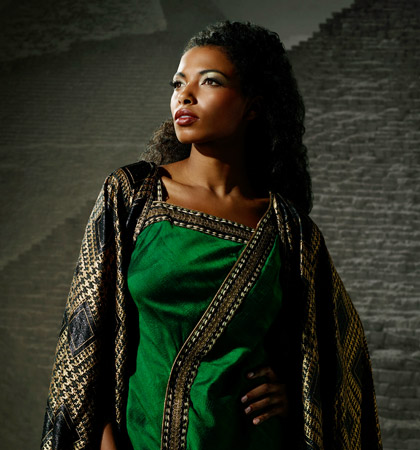 The Dallas Opera’s production of Aida was well-staged, the arias were well-sung, the choreography was well-danced, and yet despite these technical proficiencies, I was emotionally unmoved by the production as a whole.  Although this opera has always been loved for its grand pageantry, the true essence of the story lies in the intimate relationships between the three main characters. Unfortunately, here, the three leads Latonia Moore (Aida), Nadia Krasteva (Amneris), and Antonello Palombi (Radames) had little chemistry on Wednesday night, and their lack of intimacy created a hollowness that plagued the entire performance.

As bad as that may sound, please don’t misunderstand.  This was a beautiful production. Aida tells the story of an Ethiopian princess who is taken captive and made a slave by the Egyptians. While Aida serves as handmaiden to the princess of Egypt, she falls in love with Radames, the commander of the Egyptian Army.   Unfortunately, the princess also is in love with Radames and seeks to uncover Aida and Radames’s love affair. When Egypt goes to battle with Ethiopia, Aida not only has to continue to hide her love, but she is also made to choose between her homeland and the man that she loves.

Latonia Moore’s performance was the highlight of the evening.  Her voice was stunning throughout. Even crumpled on stage when overcome with melancholy, she could effortlessly hit her high notes, releasing them so they could soar over the orchestra.  The intensity she brings to her phrasings in piano also reflect the amazing amount of voice control she has mastered. But most importantly, Moore’s acting and singing brought an authenticity to the stage. It is hard to tell whether we were watching the emotional desperation and misery of Aida or Moore herself. Either way, by the end, there couldn’t have been anything left of Moore as the curtain went down — because she had left every ounce of herself on that stage.

Nadia Krasteva, who played the Egyptian princess Amneris had a controlled and traditionally beautiful voice. If she had not been up-staged by Moore, she could have shined. Unfortunately, several times throughout the production, Krasteva’s voice was completely drowned out by Moore’s higher notes and volume.

Amneris is by far the most interesting of the main characters. During the first three acts, the audience only sees Amneris’s outward motivations– she is a spoiled princess who is used to getting what she wants. Her desire to ensnare Radames and destroy Aida seem to be only a symptom of her unreasonable jealousy and petulant desire to win. It is not until the last act that we comprehend the true extent of Amneris’s love for Radames.   Quickly the audience no longer sees her as a one-dimensional villain. Her story becomes as tragic as Aida’s.

This reveal, however, ideally should be done through a slow progression with foreshadowing to hint at the final development. This was not how Krasteva played this role. Instead, she completely recreated the character from one scene to the next, providing little continuity to the character development. 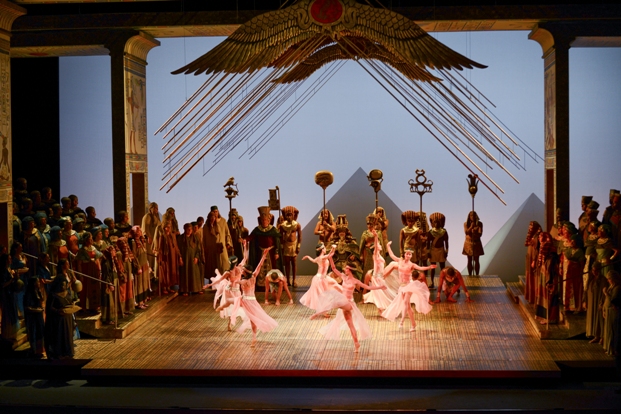 Antonello Palombi was probably my biggest complaint of the evening. His singing was superb, but his acting was stilted and unnatural.  He relied too much on over-sized arm gestures to reveal his emotions. Many times he would plead with the audience rather than his fellow actors.  In those moments, it was as if the rest of the stage disappeared for Palombi, and all that remained was his own solipsistic universe.

During future performances, if there is a break down in intimacy between the three main characters, the root of the problem will likely be Palombi. This was only made more evident in Act III when Moore sings a duet with Lester Lynch, who plays Aida’s father, Amonasro. In that scene, Amonasro convinces his daughter to elicit information from Ramades so that the Ethiopians can rise up agains the Egyptians. In just one duet, Moore and Lynch create one of the most emotional scenes of the evening. They were perfect together.

With the exclusion of one unfortunate male dancer that stuck out like a slightly-clumsy sore thumb (I just couldn’t take my eyes off the guy), the dancing and choreography (by Kenneth von Heidecke) was elegant, delightful, and challenging. So many times audiences can overlook the choreography in an opera. But in this production of Aida, the choreography is integral to several of the scenes, creating an ethereal, flowing quality juxtaposed against the large, looming set pieces.

Although this production is not without its flaws, it is worth seeing. You’ll definitely enjoy Moore’s brilliant performance, the legions of talented supernumeraries on stage, the over-sized set pieces that suggest the temporal nature of human lives, and the saturated colors and design of the costumes that make the stage look more like a painting than a stage production. Definitely worth checking out.