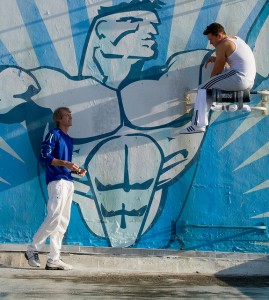 We have been hearing tons of rumors today about Michael Bay casting Mark Wahlberg as the leading man in the next ‘Transformers’ film.  Well, I guess it is official as of now.  Bay announced the news this evening on his website.  We have also reporter before that Bay wants to reboot his own series, instead of making a direct sequel.

This is not surprising as Wahlberg and Bay have teamed up already for an action film called ‘Pain and Gain’ , which also stars ‘The Rock.  Even earlier today, Bay said all the rumors were false, but then he released this:

After an exceptionally successful collaboration on the upcoming “Pain and Gain,” Michael Bay has cast Academy Award®-nominee Mark Wahlberg in the highly anticipated “TRANSFORMERS 4.” The film will hit theaters June 27th, 2014.

“Mark is awesome. We had a blast working on “Pain and Gain” and I’m so fired up to be back working with him. An actor of his caliber is the perfect guy to re-invigorate the franchise and carry on the Transformers’ legacy,” said Bay.

Bay will direct the next installment in the “TRANSFORMERS” series, which begins shooting next spring. From Paramount Pictures, a division of Viacom, Inc., in association with Hasbro, the film will be produced by Don Murphy & Tom DeSanto, Lorenzo di Bonaventura and Ian Bryce, and executive produced by Steven Spielberg, Bay, Brian Goldner and Mark Vahradian.

From acclaimed director Michael Bay comes “Pain and Gain,” a new action comedy starring Mark Wahlberg, Dwayne Johnson and Anthony Mackie. Based on the unbelievable true story of three personal trainers in 1990s Miami who, in pursuit of the American Dream, get caught up in a criminal enterprise that goes horribly wrong. Ed Harris, Tony Shalhoub, Rob Corddry, Rebel Wilson, and Bar Paly also star. The film is based on magazine articles by Pete Collins, with a screenplay by Christopher Markus & Stephen McFeely and produced by Donald DeLine, Michael Bay and Ian Bryce.

So there you go.  Not too excited about this.