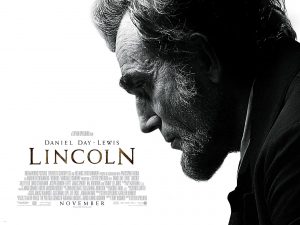 Steven Spielberg is one of the most respected directors of our time. Naturally, when it was announced that he would be directing a biographical film of Abraham Lincoln, we were all pretty excited. This excitement was further elevated when we discovered that Daniel Day-Lewis would be cast as Lincoln himself.  To add to all those big names, throw in “you really like me” Sally Field, notoriously cranky Tommy Lee Jones (as Thaddeus  Stevens), and super talented dreamboat Joseph Gordon-Levitt, and I mean, how could this possibly go wrong?

The film attempts to give us a historically accurate depiction of the politics involved in the passage of the Thirteenth Amendment while simultaneously displaying the mental torment faced by the President in attempting to achieve his goal.  In order to achieve this, the audience is treated to a scattered history lesson of a multitude of characters and their individual motivations throughout.  As it turns out, this is the perfect recipe for a decentralized story, attempting to fill in the blanks with subscripts as to the time and place of each event to introduce the audience to each of the characters, a jumbled mess of a timeline, and a long process towards a climax which would have been impressive if not for the mental drain the audience must travel in order to finally reach it. 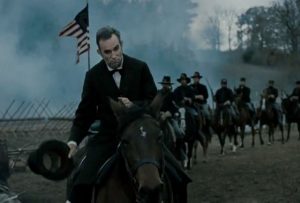 Now it’s not all bad, the performance by Daniel Day-Lewis is amazing, and is likely enough to warrant this film some great reviews across the board.  Day-Lewis completely becomes the President, a gifted wordsmith who will use the law and its myriad of interpretations to achieve his goal.  A very notable performance by Jared Harris (that Brit in Mad Men) as Ulysses S. Grant surprised us all.  And there is some great comic storytelling in the way of James Spader and his lobbying hoodlums.

The real problem is that this film is Spielberg at his Spielbergiest.  Every single scene in this movie is stylized to look like a Civil War era painting, complete with impeccable scenery, wardrobe, and lighting.  Every single interaction between characters is incredibly dramatic and pulls at heartstrings.    Day-Lewis responds to each challenge with carefully thought out soliloquies that paint Lincoln as the master thinker that we already know he was, and lead us to believe that this is just the way the man made conversation (“How is your breakfast, honey?”  “The journey of the eggs from a fair chicken’s womb to my breakfast plate is an arduous struggle, from farmers to producers to the simple yet charming delivery boy, this path has led this food to a beautiful destination, and I do believe it needs salt.”)  Though Spielberg probably takes great pride in this accomplishment, it makes the film seem less real, overly romanticized, and feels more like homage than biography. 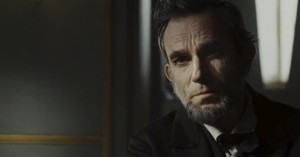 And that perhaps is the issue.  This film is ultimately a tribute, and in that sense, it succeeds with flying colors.  Unfortunately, it fails to make us believe that any of what we are watching is real.  It is indeed a beautiful portrait, but the subject is so obviously posed that it fails to convey an accurate depiction of reality.

P.S.
So, aside from that, Mrs. Lincoln, how did you like the film?