‘Pulp Fiction’ and ‘Reservoir Dogs’ Will Return to Theaters This December!!! 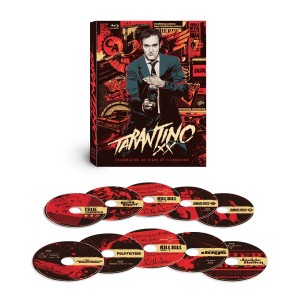 Good news everyone.  Celebrating Quentin Tarantino’s filmmaking career spanning two decades, Miramax, NCM® Fathom and IGN present two of his most acclaimed works “Reservoir Dogs” and “Pulp Fiction,” each in theaters for only one night this December. “Tarantino XX: ‘Reservoir Dogs’ 20th Anniversary Event” will hit select movie theaters nationwide on Tuesday, Dec. 4 at 7:00 p.m. local time, and “Tarantino XX: ‘Pulp Fiction’ Event” will follow two days later on Thursday, Dec. 6 at 7:00 p.m. local time, with matinees in select markets. Each cinema event will include a special feature showcasing Tarantino’s 20-year career and a selection of hand-picked movie trailers from films that inspired him as a filmmaker.

Tickets for “TARANTINO XX: ‘Reservoir Dogs’ and ‘Pulp Fiction’” are available at participating theater box offices and online at www.FathomEvents.com or www.tarantinoxx.com. The events will be presented using new digital cinema projection systems in more than 625 movie theaters across the country. For a complete list of theater locations and prices visit the NCM Fathom Events website (theaters and participants are subject to change).

Audiences across the country will be exhilarated by these gritty and innovative films that launched Tarantino’s iconic career, in which he has received the industry’s top honors including an Academy Award®, a Golden Globe Award®, as well as nominations for both an Emmy® and a Grammy® award.

“There is no doubt that Quentin Tarantino’s writing and directorial style has reinvented filmmaking as we know it,” said Shelly Maxwell, executive vice president of NCM Fathom Events. “Join Vincent, Jules, Marsellus Wallace, Mr. Orange, Mr. Pink, Mr. Blonde and the rest of his infamous characters as they return to the big screen in this special two-night Fathom event.”

Released on Oct. 23, 1992, and named the “Greatest Independent Film Ever Made” by “Empire Magazine,” Tarantino’s directorial debut assembles four perfect strangers to pull off the perfect crime. But when their botched robbery reveals a police informant among them, their simple robbery explodes into a bloody ambush. Nominated for the Grand Jury Prize at the Sundance Film Festival (1992) and awarded the International Critics Award at the Toronto International Film Festival (1992), “Reservoir Dogs” is raw, violent and unforgettable.

Two years after his groundbreaking debut, Tarantino released “Pulp Fiction” – hailed by critics and audiences worldwide as a film that redefined cinema.  Recognized as one of AFI’s “Top 100 Films of the Last 100 Years,” “Pulp Fiction,” set in the basking sun of L.A., follows a burger-loving hit man (John Travolta), his philosophical partner (Samuel L. Jackson), a drug-addled gangster’s moll (Uma Thurman) and a washed-up boxer (Bruce Willis), as their four tales converge in a story of violence and redemption. Honored with an Academy Award® for Best Original Screenplay (1994) and earning seven total nominations, including Best Picture and Best Director, “Pulp Fiction” has been listed as one of the best films of all-time by Time and Entertainment Weekly.

Miramax and Lionsgate Home Entertainment will release the “Tarantino XX: 8-Film Collection,” on Blu-ray™ Nov. 20. The set contains eight films personally selected by Tarantino to illustrate the first 20 years of his career, plus two extra discs packed with over seven hours of exclusive, never-before-seen interviews and special features. The set also features striking, original artwork designed and illustrated by MONDO (www.mondotees.com). Tarantino’s newest film, “Django Unchained,” will be released in theaters on Dec. 25.