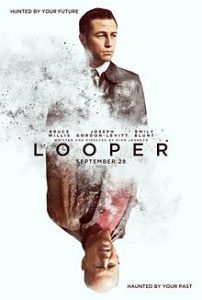 Science Fiction is back in a big way.  With the recent ‘Prometheus’ film, ‘John Carter’, ‘MIB3’, and ‘The Hunger Games’, audiences are proving they are ready for a huge sci-fi kick in theaters.  Rian Johnson’s ‘Looper’ is one of the better sci-fi films to come out this year, if not the best so far.  ‘Looper’ is a highly entertaining thrill ride that combines time travel, telekinesis, and realistic future world.  I was very happy to see that Johnson got the sci-fi genre right, and it left me wanting more.

‘Looper’ centers around a guy named Joe (Joseph Gordon-Levitt), an assassin who kills people sent back in time.  Joe lives a few decades into the future, where the city is at the start of total destruction.  Gold and silver are a hot commodity, and fuel no longer exists.  Joe works for a company set up even further into the future where they send people back in time to Joe’s present state, blindfolded and hands ties behind their backs.  One these people appear in front of Joe, he shoots them dead with a blunderbuss and collects his money.  These assassins are called Loopers.

Once in a while, every Looper’s time must end due to various reasons, and the Looper’s future older self will be sent back in time for the young Looper to kill.  So essentially, they kill themselves.  This happens with Joe, as his future older self, played by Bruce Willis, appears before him.  Young Joe hesitates in shooting his future self, and old Joe escapes.  This is very bad news for the company that funds the Loopers. 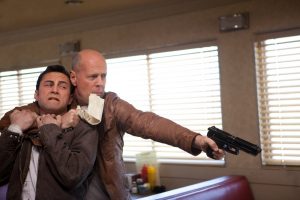 You see, in the near future, time travel was invented, but it was outlawed quickly as to prevent anybody going back in time to change history.  So time-travel now only exists as a means to kill people, or a body removal system of sorts.  It is run by a large gang with its leader known as The Rainmaker, an evil overlord of sorts who kills many people at once.  Come to find out, The Rainmaker starts using the time travel system to only kill Loopers.

Young Joe is no hero or even really a good guy.  He is an addicted drug user, and not above ratting on his friends in protection of his money.  Joe’s boss is Abe (Jeff Daniels), who likes Joe enough, but is all business.  Daniels adds a bit of comic relief here and there with his dialogue.  Joe’s friends are Seth (Paul Dano), a fellow Looper and Suzie (Piper Perabo), a stripper/escort.  Seth gets bad news from his boss that his time is up and that he will has to kill his future old self.  Seth does not do this and is now on the run.  He tells Joe that, “They’re closing all the loops.”  Joe hides Seth, but not for long.

Also, in the future, random people have developed telekinesis.  This sounds cool and all, but the powers only seem to be limited to lifting small objects, the size of a quarter with their minds.  So once young Joe and old Joe finally have a sit down to discuss their futures, we  find out that young Joe wants to kill the older version of himself, while old Joe is hell-bent on finding the evil ‘Rainmaker’, who is a kid in this place and time, so that his wife won’t be killed by henchmen of The Rainmaker. 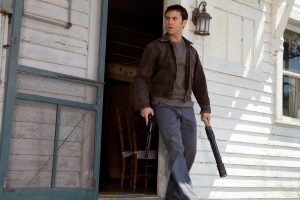 Johnson’s futuristic world is great.  It’s more realistic than out of this world high-tech.  It looked like they still had the vehicles we have today in 2012, but instead of fuel, there was some sort of rigging system where a pipe went from the gas tank to the exhaust port, with the hod of the car covered in solar panels.  A few motorized bikes hovered, and mobile phones looked futuristic.  And it looked like the drugs that everyone took in the future were in the form of eye drops.

The acting is good all around.  It wasn’t anything to write home about, nor do I think anyone will win acting awards, but it was believable and certainly not over-the-top.  One thing Johnson did, was he made Levitt try to look like a younger Bruce Willis.  It looked like a mix between CG and actual prosthetics were used on Levitt to change the nose, eyebrows, eyes, and chin.  It didn’t look bad, but something was definitely off about it.  It didn’t look quite right.

‘Looper’ as a whole works on all levels.  Everything is precisely mapped out from start to finish, with tons of twists and turns along the way.   We can all thank Johnson for this.  If this is what we can expect from the many future sci-fi films to come, then I welcome it with open arms.  Plus, I’d like to officially add ‘Looper’ into my top five time-travel films.  See ‘Looper’ this weekend.