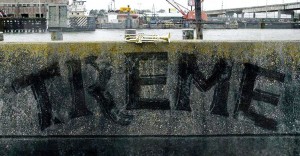 First, the people came back. Then, the crime. Now, more than two years after the near death of a great city, the money is starting to arrive, which would sound like a solution if this were some place other than New Orleans, and this was some other era but America at the millennium. For the people of New Orleans, even the promises of redevelopment come with strings attached, and every dollar that shows up – whether from government disaster relief, or from venture capital, or even from those seeking to remake New Orleans in the wake of Katrina – carries with it new dynamics and new risks. National interest has waned, moving on to the next headline, but those who know and love the Crescent City have no choice. They must find their way back to what matters in the life of their city. However, little of what they can bring to bear yields a quick result, and nothing about New Orleans – its government, its police department and courtrooms, its school system – works as it should. Nothing is easy.  In the end, their only weapons are community. And culture.

Having met some of these New Orleanians in the journey thus far, TREME picks up on the ongoing battle topreserve what matters to the vulnerable city this season. Aattorney Toni Bernette (Melissa Leo) carries forward her lonely fight against a staggeringly corrupt police department, and finally stumbles upon a natural ally in L.P.Everett (Chris Coy), an out-of-town freelance reporter working for ProPublica and The Nation magazine. Together and separately, they continue to pick apart the lies that have papered over death after death in the immediate aftermath of Katrina. That investigation creates new problems in Bernette’s wary friendship with Lt. Terry Colson (David Morse), who finds himself in the crisis of his career, confronting the failures of his department and the complicity of so many with whom he labors. 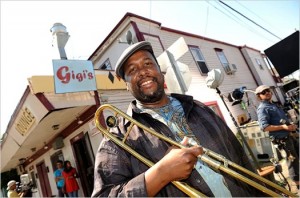 Exiled to some of New York’s finest kitchens, Chef Janette Desautel (Kim Dickens) considers a profitable careeropportunity in New Orleans, one that will test her desire for personal and culinary authenticity. Similarly, Annie Tee’s (Lucia Micarelli) career begins to accelerate, requiring her to find more ambition than often resides in the New Orleans clubs and on street corners, and demanding she acknowledge that the forces dictating American culture often lie elsewhere. Meanwhile, having struggled as a journeyman musician and having failed as a bandleader, trombonist Antoine Batiste (Wendell Pierce) examines his own life and discovers meaning and a sense of civic purpose where he least expected it.

Made vulnerable by the indictment and conviction of his local political patron, Texan Nelson Hidalgo (Jon Seda) struggles to find a way back into the money trail, even as the big money is arriving in New Orleans. As the large development projects begin to come online, he’s determined not to be left behind.

All the fresh talk of a new New Orleans, however, finds little favor with Big Chief Albert Lambreaux (Clarke Peters), who’s heard it many times before. And while the possibility of creating something worthy in the wake of the Katrina disaster is tempting to many, including his son, modern jazzman Delmond Lambreaux (Rob Brown), the Big Chief of the Guardians of the Flame seems stubbornly rooted in the traditions of the past – ever more so as he suddenly finds himself in the fight of his life.

A victim of a brutal sexual assault and robbery last season, bar owner LaDonna Batiste-Williams (Khandi Alexander) embarks on another long fight to reclaim her life, her purpose and her dignity as the case against her attackers winds slowly toward a courtroom. As the stakes are raised, LaDonna draws conviction and confidence from an unlikely new friend.

The Greek chorus to both comedy and tragedy, DJ Davis McAlary (Steve Zahn) finds it difficult to balance girlfriend Annie Tee’s rising career with his own more improbable one. He has grandiose plans and visions, and few who believe in his projects, but his pursuit of the golden ring brings him to understand that his might not be the only musicalcareer that was denied its just rewards. For McAlary, the cost of following his dream is the realization that a devotion to New Orleans and its culture guarantees no greater reward than the love itself.

Meanwhile, Annie’s ex-boyfriend Sonny (Michiel Huisman) continues to fight his addiction, and comes to the realization that he might have to do so by walking away from the city and its culture, and confronting himself in a different world altogether – and with different allies – but starts to see a path to a better way.

“We’ve committed ourselves to documenting post-Katrina New Orleans in a way that takes relatively few liberties with what was actually at stake,” says David Simon. “These are not mayors or police chiefs or gangsters battling for the future of their society. These characters are ordinary people – musicians, laborers, bar owners, fishermen, cooks – who couldn’t bear to walk away from what they understood to be great about their city. Their only weapon was the culture of New Orleans – its music, its food, its traditions, its street life. That’s what has brought the city back to the extent that it has returned.”

Noting that TREME is in many ways an allegory not just for New Orleans, but for the rest of the country, he adds, “New Orleans assumed certain things back in 2005. Certain basic things – infrastructure, some basic institutional responsibility, some sense that they were part of a viable social and political compact, that they weren’t alone. A few short years later, all Americans were made to understand that such things are, sadly, only assumptions. We are, all of us, on our own in a very real sense.” 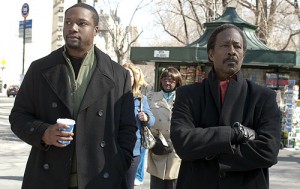 Antoine Batiste flirts with martyrdom; Janette Desautel encounters her old nemesis,Enrico Brulard (Victor Slezak), and a new suitor; Delmond and Albert Lambreaux debut their Indian-jazz album; Toni Bernette meets L.P. Everett, a new ally in her investigation of post-Katrina killings; LaDonna Batiste-Williams finds living with in-laws is its own kind of hell; Sonny is in an in-law hell of his own, and he and Linh (Hong Chau) aren’t even married; Nelson Hidalgo is barking up new money trees.

Earlier this year, TREME received a Peabody Award for its second season. The first season of TREME was Emmy®-nominated for Outstanding Directing for a Drama Series (Agnieszka Holland, “Do You Know What It Means (Pilot)”) and for Outstanding Original Music and Lyrics (Steve Earle, “This City”). In addition, the series was nominated for Grammy Awards in the categories of Best Compilation Soundtrack Album for a Motion Picture, Television, or other Visual Media and Best Song Written for Motion Picture,Television or Other Visual Media (Steve Earle, “This City”).

For more on the series, please visit facebook.com/hbo and twitter.com @HBO #Treme.