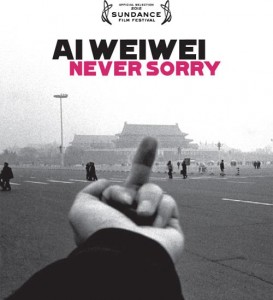 ‘Ai Weiwei: Never Sorry’ is an amazing documentary that centers around the world renowned artist known as Ai Weiwei.  Perhaps Weiwei is best known for his design work for the Bejing National Stadium known as The Bird’s Nest, which was the focal point for the 2008 summer Olympics. Shortly after the stadium was finished, Weiwei publicly denounced the games as Chinese propaganda by all the media not covering Bejing’s vast underclass people. Those statements put him in the public spotlight and he became under heavy scrutiny from the Chinese government, but Weiwei’s courage to stand up to the Chinese government became the main emphasis of his art.

Director Alison Klayman follows Ai Weiwei through some of the best and worst moments of Weiwei’s life.  We not only see the artist and political dissident side of Weiwei, but we also see the father, husband, and friend side of Weiwei. This documentary shows clear evidence of the Chinese government trying to silence one of its citizens for speaking out against the government by force, violence, and any means necessary.  We see the police install security cameras  in front of Weiwei’s home, we see them track him on his travels and harass him, and we see them brutally beat him in his hotel room late at night as he is showing support for a friend who is on trial for speaking out against the Chinese government.

Due to the beating by the police, Weiwei suffers a life-threatening brain hemorrhage.  He documents everything and tries to get the police to acknowledge their actions in the role of his injuries, which never goes pleasantly.  This is great for Klayman, as she is front and center in a foreign land, seeing the frightening world that is the Chinese government.  Her lens captures several violent incidents brought on by the police and the oppression it causes.  Yet, the camera also captures the intimate moments of Weiwei and his family and his art production.  It’s a well balanced documentary. 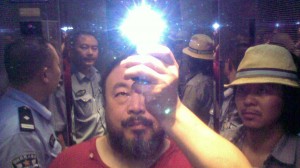 Ai Weiwei was asked, “What kind of artist does he consider himself to be?” His answer was that he considered himself like a chess player, that when his opponent made a move, he made a move.  We see evidence of that throughout ‘Never Sorry’ as he is tormented by the police and government.  One of his more moving works was inspired by the 2008 Sichuan earthquake that killed 70,000 people.  Weiewei went above and beyond to create a wall commemorating the thousands of students killed in the earthquake, by simply listing the names of the dead.  The work he did to create this was out of this world.  Weiwei traveled to Sichuan and interviewed survivors and tracked down over 5,000 names and birthdays of the children killed in the earthquake.  It was clear that these children died die to poor building conditions and shoddy “tofu” construction.  The Chinese government refused to release any names to the public of the deceased.

As the documentary comes to an end, it was widely publicized that Ai Weiwei went missing.  He had disappeared for 81 days and was held at a secret location by the Chinese government.  When he was released, he told all press that he couldn’t talk about anything, which was weird, because all he did was speak his mind.  It was as if they brainwashed him or threatened his family.  The Chinese government said they held him for 81 days to question him on tax evasion charges, which was just a front to silence him on his beliefs. After the film was shot, news headlines showed that Weiwei lost his court appeal concerning the tax evasion charges. 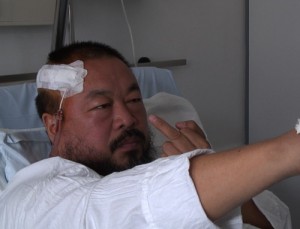 Ai Weiwei’s art is beautiful and shocking at the same time. He is known for taking pictures of famous and political monuments with his own middle finger in front of the camera, telling the system to “fuck off”.  Weiwei also is known to take genuine ancient artifacts, such as very old vases and statues and break them intentionally, or paint over them with mainstream logos such as the Coca-Cola logo.  It’s a very effective work of art.

‘Ai Weiwei: Never Sorry’ shows us the man and the artist, but also shows us the place from which he came.  A place where freedom has severe limits and where anyone can be beaten or kidnapped by authorities for speaking their mind.  We see the oppression and chaos is causes.  This is where Weiwei turns to social media via blog and twitter to get his word out.  But, most of the time, Weiwei and these social networking sites are shut down by the government.  He recognizes that he is always being watched and that his own country won’t validate or recall the thousands that died in the earthquake, so Weiwei covers a German art museum in thousands of backpacks that were the kind the students wore when they went to school.  I believe Ai Weiwei aims to make the world a better place through art, and I believe he has.