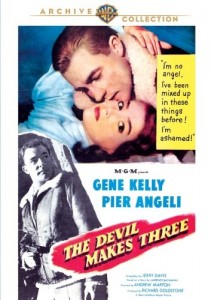 ‘The Devil Makes Three’ came out 50 years ago, and still holds up today.  This film which also stars Gene Kelly is part caper, part military, and part thriller.  Just like ‘Black Hand’, this is a lesser known film of Gene’s, but it’s still a great one.  And, I believe all of it was shot on location in Germany in the early 50’s.  I think if you give ‘The Devil Makes Three’ a chance, it will be a staple in your collection.

The year is 1947 and Captain Jeff Eliot (Gene Kelly) has returned to Munich for the holidays to visit the Lehrt family, who during the Nazi occupation, hid Eliot from the Nazis and helped him escape.  Once he arrives, Eliot unfortunately learns that the Lehrt household was blown up not long after he left, along with the family.  However, after Eliot does some research, he learns that not all the family was killed in the explosion.  The daughter Wilhelmina or Willie seemingly escaped.  Eliot decides to track Willie down to see if she is okay.  He eventually finds her living a life of a prostitute to survive.  He wants to help her and bring her to safety, but she is hesitant.  Eventually, she decides that she is ready to leave the lifestyle or so we think.  Willie tells Eliot she wants to spend the holidays with a family that she knew since childhood and that if Eliot could drive her there.  Little does Eliot know that Willie is working with the Nazis to plan a huge comeback with her help.  There are car chases, gun fights, and tons of thrills.  The love interest between Willie and Eliot is a bit strange because of the age difference, but it doesn’t detract from the film.  Solid 50’s thriller.  You’ll like it.

The video is presented in 1.37:1 full frame and has been remastered in standard definition.  This  looks pretty great for being a 50 year old b/w film.  Yes, there is still some dirty spots, but this is the Warner Archive collection.  You can’t expect Criterion treatment here.  However the detail is sharp and this is the best the film has looked. There were some interesting remastered edits, but it shouldn’t take you out of the film.  The audio is a dolby 2.0 mono mix and does its job.  I wish this film had a 5.1 mix for all the action, but it’s done nicely.  Just don’t expect too much.

I definitely recommend this film, but as always I feel like WB is wanting too much for these archive releases.  Granted you won’t find them anywhere else, and they are made to order, I just think that chargin almost $20 bucks for a DVD with no extras, no HD, and no 5.1 audio is a bit much.  But, where else are you going to get some hardcore Gene Kelly action.  Nowhere I tell you.  I do recommend picking this up, but you might want to wait till it goes on sale, which might be never.  Great film.  WBSHOP has the film for $17.95, while Amazon has it for $19.99.