Classic Gene Kelly films are always a must.  Did you know Gene was in some some thrillers and mafia type films?  It’s true.  You should check out ‘Black Hand’.  This is billed as Gene’s first dramatic role, and he is great in it.  And with the big release of ‘Singing in the Rain’ recently, a few of Gene’s lesser known works are trickling out.  Although it is a made-to-order Warner Archive DVD with no extras, I still recommend this release.  You won’t regret it.

You probably have heard the story before.  ‘Black Hand’ is about a good guy standing up to the Black Hand, a group of Italian mobsters who are shaking down their town.  Gene Kelly plays Johnny Columbo (great name), who returns to his old stomping grounds to see that his once home has changed for the worst.  He is out for revenge over the death of his father and when he goes to the cops, the ruthless Black Hand starts killing witnesses and kidnapping people.  Columbo gets out to the people to start up a group to fight back against the gangsters.  I’m sure if you research early 1900’s gangster crime, you will see similarities to this film.  The violence and killings seem to be taken from actual history.  And who is to say this didn’t actually happen.  There are a quite a few twists and turns that will keep you happy and it is so good to see Gene play a darker role.  Don’t get me wrong, he is a good guy, but there are some moments when his sinister side shows.  It’s very cool. 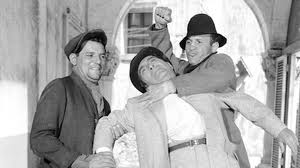 The video is presented n 1.37:1 full frame and is actually newly remastered, but only in standard definition.  Of course there is still some dirt and flaws with the print, but over all, the detail is sharp, and for it being a b/w print, it looks great.  The audio comes with a dolby 2.0 mono mix and sounds decent enough.  It’s mostly dialogue in this film, so there is not a whole lot os bass to rumble your place.  I just wish these were on bluray with 5.1 sound.

If you are  a fan of Gene Kelly or old gangster films, I definitely suggest picking this up.  This is the best the film has looked thus far, and hopefully sometime in the future WB will be releasing these in blu-ray form or whatever the next format is.  They really deserve it.  This is not on amazon, so you will have to purchase it directly from the WBSHOP below.  It’s currently $17.95, but they have free shipping.