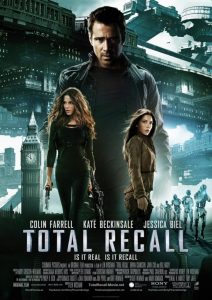 Some people will say that you can’t compare a remake to the original.  They say, “Let it stand on its own.”  It’s very difficult to do that with a film that garnered a lot of attention 22 years ago and still is a milestone in filmmaking in the science-fiction genre.  And it’s very tough to let a remake stand on its own if it doesn’t stray to far from the original.  There will always be comparisons.  Unfortunately, this 2012 version of ‘Total Recall’ is like a sore inside your mouth that is very painful that would only get better if you would stop tonguing it, but you can’t.  The only redeemable thing about this remake of ‘Total Recall’ are the visual FX.  If you took away that aspect of the film, you might have well been watching static on the screen for two hours.

There are so many problems with this remake, that it makes ‘Gigli’ look like ‘Citizen Kane’.   The remake still draws a lot of story from Philip K. Dick’s short story, ‘We Can Remember it For You Wholesale’, but every attempt at filmmaking is lost with director Len Wiseman.  Wiseman is responsible for a couple of the ‘Underworld’ films and the horrid sequel, ‘Live Free or Die Hard’.  In the words of Kevin Smith, “…In Hollywood, you fail upwards.”  It’s sad, but true.  And in Wiseman’s case, he has received bigger budgets each time, with bigger casts, and none of his films have been a success.

Let’s get a few things out of the way first.  This remake is rated PG-13.  The Schwarzenegger version was rated R.  By having this movie PG-13, the action and violence is dumbed way down, and only really consisted of a couple of car chases, a few gun shots which only hit robots mostly, and a couple of hand to hand combat scenes.  There was barely any blood in the entire film other than a fresh scar which each character seemed to wipe off with a towel, so their pretty faces could be seen. 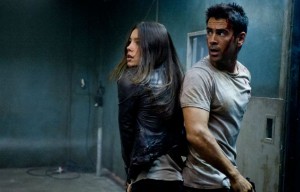 Also, this remake does not take place or have anything to do about Mars.  There are no aliens, problems with air, or any real danger to anybody in the film besides Quaid (Colin Farrell).  Instead, this film takes place in an already post-apocalyptic world where there are only two small pieces of land left to live on.  There is the UFB (United Federation of Britain), which is a well off society.  On the opposite side of the globe is The Colony, which consists more of the poor and needy people.  The UFB relies on the poor people of The Colony to travel each day to the other side of the globe for cheap labor to support a large security regime of robots under the rule of the evil Chancellor Cohaagen (Bryan Cranston).  Cohaagen has plans of his own in the end.  People get from one side of the planet to the other by way of something called ‘The Fall’, which is a large capsule that travels through the center of the Earth in 17 minutes to the other side.

So much like the original, Douglas Quaid is a blue collar worker in a factory and is wanting a change from his boring job.  He is married to his wife Lori (Kate Beckinsale), and it seems like he has a good life, but he is plagued by violent nightmares of what seems to be his past life and a mysterious girl named Melina (Jessica Biel).  So, of course, he ends up at Rekall.  Unlike the original Rekall business, which was set up more like a used car sales business, this one seemed to be very secretive and free to use for select people.  It just didn’t make sense.  However, it was good to see John Cho play the role of McClane, the guy in charge of administering the Rekall service, which consisted of drugs, electronic devices, and a program to intrude your memory.

Before they administer any of the drugs or implant any memory into Quaid, McClane sees that Quaid is actually a secret spy and pulls a gun on him.  Then the security force of the UFB enters to which Quaid kills everyone there to his own surprise and disbelief.  From here till the end of the film, Quaid struggles with his identity and has no memory of who he really is or his past.  He is on the run from the ever growing UFB security forces as he follows a set of clues that will eventually lead him to find Melina and Matthias (Bill Nighy) to stop Cohaagen’s evil plan.  I suspect Matthias is the Kuato character from the original film minus the protruding alien from that guy’s stomach.  And Matthias only lasts about one minute on film, but is referred to throughout the entire film. 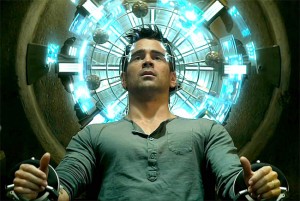 It’s difficult for anyone really to step into Schwarzenegger’s shoes.  Colin Farrell does his best, but with the terrible script and awful direction, Farrell comes across as bland and uninteresting from start to finish.  There is no emotion and no delivery on dialogue.  It was more of just reading cue cards.  Then there is Kate Beckinsale who is actually a great villain in this film, however she suffers from the same problem as Farrell.  Beckinsale is actually married to the director, and you can definitely tell that by watching her action scenes on screen.  She is the best fighter out of anybody in the film, and everything was in slow motion with her.  There was never a scratch on her and she always looked perfect, no matter how badly she was beaten.  Jessica Biel’s Melina could have been so much better.  Instead she came off as a minor role who just did a lot of running away from people.  She wasn’t the badass as portrayed in the 1990 film.  Bryan Cranston’s Cohaagen was a bit different from the original.  Cranston was the only one to show any type of acting skill in this remake and it was actually pretty cool to see Cranston’s Cohaagen kick some ass.

On a positive note, the visual FX and the technology represented in the film were all top notch. The post apocalyptic city was done very well with tall buildings, multiple levels of roads, and magnetic cars.  The city landscape reminded me of the futuristic city portrayed in ‘The Fifth Element’.  There was also a very cool elevator system that connected buildings that reminded me of the film ‘Cube’.  The vehicles ran on magnetic strips and you could switch drivers instantly by moving the steering wheel from one side of the car to the other.  There was also mobile phones that could be implanted in your hands, so that you didn’t have to hold anything physical to talk to someone.  That was pretty much the only aspect of the film I enjoyed.

Wiseman incorporated several miniscule characrters from the original and even some of the same dialogue throughout, but every single item of this film failed miserably, with the exception of the visual FX.  And it seemed like Wiseman had a hard on for J.J. Abrams, because there were more lens flares in this remake then in all of Abrams’s films combined.  By all means, avoid this film.  Instead, pretend this remake is a dream that never happened and watch the original. You will be more satisfied with that outcome.