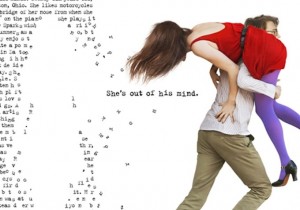 ‘Ruby Saprks’ is a great follow up film from the directors of ‘Little miss Sunshine’ that is an adventure of a writer and his creative process which comes to life…literally.  Zoe Kazan wrote an exceptionally great script, and with the help of directors Jonathan Dayton and Valerie Faris, ‘Ruby Sparks’ hits every beat.

The film centers on Calvin (Paul Dano), a late twenties something writer whose first and only book became a huge success.  Since then, he has suffered from writer’s block, a thing most of us have gone through.  In the vein of films like ‘Harvey’ and ‘Stranger Than Fiction’, ‘Ruby Sparks’ delivers that fantasy element of “What if my writing and characters come to life?”  Inspired by the myth of sculptor Pygmalion, who was in love with one of his creations and saw it come to life, Zoe Kazan plays Ruby Sparks, a character in Calvin’s new book.  Calvin dreams of her and eventually writes a page or two about her only to walk into his seemingly empty house to find a strange girl who mimics the exact person he wrote.

At first he thinks he is the only one who sees her, but once out in public and others start communicating with her, his world is turned upside down.  The only person he lets in on this little secret is his brother Harry (Chris Messina), who can’t believe his own eyes either.  Calvin proves his to his brother even more that this is the real thing and not just a person Calvin has hired to play a practical joke by having Calvin write something for her to do on the spot.  Calvin types on his old school typewriter that Ruby Sparks suddenly speaks fluent French and that is the only language she knows.  As Ruby is downstairs cooking dinner, she bursts in to speaking French and doesn’t realize she is doing anything out of the ordinary.  Quickly, Calvin changes her language back to English and she reverts back to it. 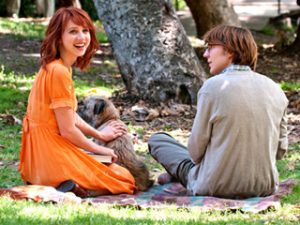 This begins the story of Ruby and Calvin.  It’s as if they have been together for years and they know everything about one another.  Calvin only had one relationship in his life and that ended badly.  So he is eager to be with someone again.  Since he created Ruby, they instantly are in love and he vows to not write her life for his benefit.  As time goes on though, Ruby seems more distant from Calvin, which forces him to write Ruby as always wanting to be with him at all times.  This is very comical as Ruby literally cries if he gets up from the couch to get a glass of water because she will miss him.  From this point, Calvin plays Ruby’s puppet-master as he tries to generate a good balance between them.

Calvin even drives Ruby out to his mother’s house on the coast to meet her.  Calvin’s mother is played by Annete Bening, where she lives in an oasis of sorts with her boyfriend/lover played by the hilarious Antonio Banderas.  Their house is very inviting with tons of plants and colors and art around cozy big furniture complete with an adult treehouse and large pool.  This house actually belongs to Sid Krofft, the creator of ‘H.R. PufnStuf’.  You can only imagine how great and magical that house was.  As everyone is enjoying the free-spirit vibe at this house, Calvin retreats himself to a lone bedroom to read.  He does not want to have anything to do with his family.  This is off putting to Ruby and we see the two grow apart. Calvin sees his creation and himself as the opposite of what he wanted.

Kazan’s script is excellent and very charming all the way through.  There is never a dull moment, and you almost want their relationship, at least in the beginning you do.  And with Dayton and Faris’s direction, ‘Ruby Sparks’ never feels fake or manipulative.  It flows easily and you develop a real relationship with the characters.  This might be, because Faris and Dayton are a real life couple as well as Dano and Kazan.

‘Ruby Sparks’ is a great little film that you won’t soon forget.  I’m sure you have seen similar stories to this one, but you haven’t seen one this good or this charming.  You’ll be coming back for more with ‘Ruby Sparks’.

Below is an interview we did with Paul Dano and Zoe Kazan.

Below is an interview we did with Jonathan Dayton and Valerie Faris.

Below is the trailer for ‘Ruby Sparks’.