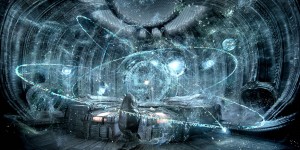 “In space no one can hear you scream.”

We have all been hearing about a movie called ‘Prometheus’ for sometime now, and all of us fans have been trying to piece the puzzle together on what it has to do with Ridley Scott’s ‘Alien’ film.  Since Scott directed ‘Prometheus’ and the original ‘Alien’ film, there has to be some sort of connection from what we have seen from the trailers, right?  The filmmakers told us that ‘Prometheus’ would be a prequel to the ‘Alien’ film.  After seeing ‘Prometheus’, I can say that it’s a very early prequel.  I’m  certainly happy Scott returned to this universe, because the ‘Alien’ franchise has been in a state of decay for a number of years starting with the 4th installment and then onto the ‘Alien vs. Predator’ series.  So, I was truly hoping to get an original film, but with strong ties to the ‘Alien’ franchise.  The question is, did it work?

Surprisingly, yes it does.  But that’s not to say it doesn’t have major blood curdling flaws.  I say the overall experience and mood of the film lives up to the hype and even has what we fans have wanted as far as a connection with the original ‘Alien’ film.  However, throughout the entire film, I couldn’t help feel a bit uncomfortable with how some of the story was being presented and the overuse of characters was on a level that made ‘Prometheus’ not the film it should have been.

“Something has attached itself to him.”

The entire ‘Alien’ universe holds a very special an unique place in my heart.  It was the first time my dad and I ever bonded.  Now I didn’t see the 1st ‘Alien’ film in the theaters, however I saw the 2nd film on the big screen with my dad.  I was very young, and my parents weren’t really the censoring parents like most of my friends growing up were.  Where I could watch rated R films like Night of the Living Dead and A Nightmare on Elm Street growing up, my friends were stuck with Disney animated films.  This is how my dad and I bonded growing up.  Over watching sci-fi and horror films.  That’s probably why I’m the cinephile uber geek man child that I am today.  Seeing ‘Aliens’ on the big screen was one of my first memories of ever going to a movie theater.  And it was the first time I ever saw my dad jump and scared. 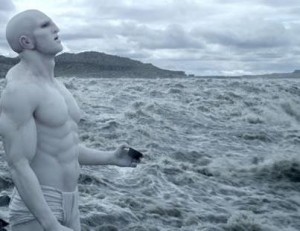 I always thought of my dad growing up as a strong guy, well he was, but to see him just as scared as I was, and both of us looking at each other knowing that we both were really scared of a film, made us closer.  We talked about it on the way home on how much we liked it and that I needed to see the original film.  I couldn’t wait.  I was nervous going to bed, because I thought that one of the Aliens had escaped from real life and gone under my bed.  Did my dad comfort me and tell me aliens weren’t real?  The answer is no.  He waited till I was half asleep and put my mother’s panty hose over his head and proceeded to  crawl on all fours into my room and grab my leg and roar like an alien.  I saw my short life flash before my eyes and screamed like a girl who just saw Michael Jackson in person.  After I stopped crying and gathered myself, I started laughing with my dad about the prank and realized it was fun to be scared and really fell in love with the film universe as well as the sci-fi/horror genre.

“Ash, that transmission… Mother’s deciphered part of it. It doesn’t look like an S.O.S.”

Where is the review, I hear some of you asking.  ‘Prometheus’ is going to be a different film for certain people.  Those of you who have never seen one of the ‘Alien’ films will be confused to a lot of the story not knowing the mythos of this universe, and then some of you will have a great time with the film who have seen the original movies, but will be perplexed by some of the actions that take place during the film.

‘Prometheus’ starts out with two archaeologists in the near future, Dr. Elizabeth Shaw (Noomi Rapace) and her colleague Dr. Charlie Holloway (Logan Marshall-Green),who discover several ancient cave drawings in different parts of the globe that have been separated by different time periods and different cultures.  These ancient cave drawings all have one thing in common, they all point to a particular place in space which is revealed to be a moon called LV-223.  Shaw and Holloway both believe that this place holds the answers to our creation and even human’s creator.  The two archaeologists are sponsored by a rich billionaire known as Peter Weyland (Guy Pearce in elderly makeup).  You ‘Alien’ fans will know that name, Weyland.  Once Weyland hears of the news, he finances and sends Shaw and Holloway along with a decent size crew to LV-223 in a spacecraft called ‘Prometheus’.

After the long two year journey to LV-223, the pair of archaeologists and the crew quickly learn that their dreams and questions are turning into nightmares and death as what they thought their creators were, are something much more terrifying that could kill off the human race and destroy Earth.  As our characters are dropping off like flies, we don’t know who we can trust and who will survive, and what answers we will get about the origins of the human race and this alien species. 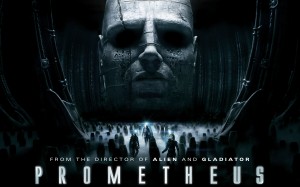 ” Mother! I’ve turned the cooling unit back on. Mother! “

One aspect I really like about ‘Prometheus’ is that has brought the sci-fi genre back to main stream.  For so long now, we have not had any decent sci-fi flicks that really capture an amazing new world  that has been both visually beautiful and almost perfectly paced.  Ridley Scott has been out of the sci-fi genre for quite some time now, and it is very welcoming to have in back in this genre that launched his career.  The opening scene alone, when we see the first creature on a new planet was some of the best cinematography I have seen in a long time.  The foreign planets were intelligently designed and were a bit scary too.  Visually, ‘Prometheus’  is incredible.

However, where I think the film falls flat on its face is with its characters.  There were far too many characters in this film.  Most of them only have a line or less of dialogue.  It seemed like I was meeting new characters with 10 minutes left of the film.  ‘Prometheus’ could have been a much better film if half of the character were cut out.  Most of the characters did not add any plot advancement to the story and only seemed to make the film add minutes.  By having too many characters, I didn’t get the time I needed with my main characters of the story, hence I didn’t care about any of them.  So when it was their time to go, I had no emotion and was actually rotting for some of them to meet their grisly end due to their lack of likability.  The characters seemed to be a jumbled mess, which hurt the dialogue of the film.

“The pit is completely enclosed. And it’s full of leathery objects, like eggs or something.”

Idris Elba and Michael Fassbender are by far the best actors in the film. Elba plays the ship’s captain and is immediately likable due to his easy going, humorous attitude.  I always felt safe wit him and knew he was a good guy.  However, the rest of the characters besides Fassbender came across as rude, dull, and ill-tempered.  Fassbender plays David who is a cyborg who tags along with the crew of ‘Prometheus’.  Fassbender’s role won’t be soon forgotten as he plays a very creepy and eerie robot who we don’t trust fully.  By seeing the other Alien’ films, we can’t always trust the cyborgs.

And for those of you wanting gore, I can happily say ‘Prometheus’ does not disappoint.  It has by far one of the best C-Section scenes I have ever seen on film.  There are plenty of jump out scare moments, creative death scenes, and even a few pints of blood.  You’ll feel your skin crawl with some of the creatures in the film.

“Oh, Mother says the sun’s coming up in twenty minutes.”

Overall, this is one hell of a sci-fi film, even with it’s major flaws in the story and characters, ‘Prometheus’ has brought back the sci-fi genre in a big way.  I’m already looking forward Scott’s ‘Blade Runner’ sequel.  If you have been craving a great sci-fi flick, one that will bring your nostalgia and memories back from the late 70’s and early 80’s, then see ‘Prometheus’.  Plus for any fan of the ‘Alien’ franchise, this is a must see, even if it has major flaws.