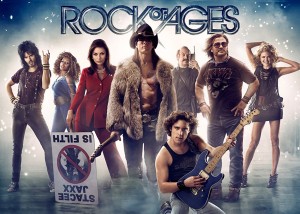 ‘Rock Of Ages’ is an 80’s Rock n’ Roll orgy turned up to eleven.  I have no doubt that 80’s rock music fans will eat this up and rock themselves out in the theater.  This musical is based on Chris D’ Arienzo’s Broadway play and has been adapted to the big screen in a major and hilarious way with an allstar cast.  Plus they got Adam Shankman (they guy who directed the remake of ‘Hairspray’) to direct this 80’s rock opus.  ‘Rock Of Ages’ is over-the-top ridiculous, campy, silly, but one hell of a good time.  You’ll leave the theater singing your favorite Twisted Sister song and wanting to change your hair into a mullet.

‘Rock Of Ages’ takes place in 1987 in Hollywood and follows two young and willing singers who work at a bar and moonlight as struggling rock stars.  There is Sherrie (Julianne Hough) who just left small town, Oklahoma to the big city of Los Angeles to make it as a singer.  And then there’s Drew (Diego Boneta), a native Los Angeles citizen who works at the most popular but aging rock n roll bar in Los Angeles who is wanting his big break into the big bad music business.  The popular rock n roll bar is called the Bourbon Room and is run by Dennis (Alec Baldwin) and his right hand man, Lonny (Russell Brand).  The Bourbon Room is running low on money due to tax issues and needs a big show.  They get legendary, but insane rock-god Stacee Jaxx (Tom Cruise) to play one last show.  Meanwhile, the bad guys of the film are Jaxx’s scumbag manager, Paul (Paul Giamatti), and Patricia (Catherine Zeta-Jones), who is the Mayor’s wife who wants to “clean up” the streets of Los Angeles by getting rid of rock music.  But little does everyone know, she holds a big secret. 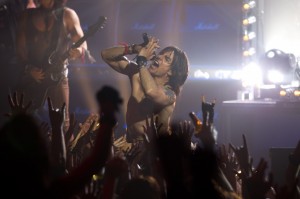 This amusing, crack pot of a film succeeds not with its terrible story or awful dialogue, but with its characters.  Tom Cruise is simply amazing as Stacee Jaxx.  I love how Cruise has become a character actor these days.  He truly owns every second of this film he is on screen.  Alec Baldwin and Russel Brand are very likable, but seemingly play themselves.  Paul Giamatti channels his his role of Pig Vomit from ‘Private Parts’ and he does a great job as a sleaze ball who you just love to hate.  Catherine Zeta- Jones’s character goes nowhere, but it was fun to see her give her all in a few dance numbers.  As for Hough and Boneta, they are merely faceless characters that just move the story along. 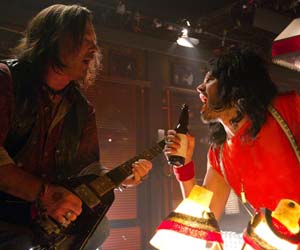 ‘Rock Of Ages’ reminded me a little bit of Julie Taymor’s Beatle music film, ‘Across the Universe’ where the lyrics of these famous songs tell and further the story line rather than the actual dialogue of the film.  You’ll hear music from Bon Jovi, Styx, Journey, Twisted Sister, Poison, Guns n Roses, and much much more during the two hour run time.  It certainly didn’t seem like two hours.  Certainly the best part of the film is Tom Cruise.  He just plays the insane, out of touch rock star to a tee.  And I hear everyone actually used their voices to sing, which Cruise did a phenomenal job.

Yes, ‘Rock Of Ages’ is out of control, unstable, and crazy.  But it’s one hell of a fun ride, just like Rock N Roll, itself.  The characters, besides the two young stars are incredibly hilarious and the music will have you singing for days and probable make you search your drawers for those long lost bandanas, acid wash jeans, and your favorite 80’s metal band t-shirt.  If you’ve seen every other film out, and are looking for a brainless and fun as hell film, then see ‘Rock Of Ages’.  It won’t disappoint.