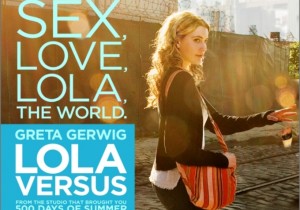 Ever been through one of those excruciatingly painful breakups that derail your life at a vulnerable time? That is the set up of Lola Versus, and for those who have suffered through this experience, get ready to see yourself in Greta Gerwig’s portrayal of Lola.

The movie starts off in a happy place. Lola, nearing 30, gets engaged to longtime boyfriend Luke (Joel Kinnaman), but in the midst of crazy wedding planning and Lola’s own euphoria, her fiancé’s cold feet cause him to cancel the wedding. Here we get into the meat of the movie — a yearlong process of healing involving Lola coming to terms with herself and her personal relationships. Is there an actual plot to this movie? Not really, but for many this won’t matter, because what seems to be the most admirable quality of Lola Versus is Gerwig’s ability to portray the angst, pain, and acceptance of a traumatic breakup.

There are different story lines for each of Lola’s relationships. You cringe and shake your head at her awkward interactions with Luke as they try to remain friends, yet continue to find it difficult to get over the ways they have hurt each other. You laugh at the antics of her struggling actress friend, Alice (Zoe Lister-Jones) as she tries to buoy up Lola and get her to try out dating other men. You know exactly what Lola is doing as she uses her friend, Henry (Hamish Linklater) to feel needed and make Luke jealous – and you feel ashamed that you’ve done the exact same thing. Lola hurts each of these supporters as the movie progresses and she hurtles towards rock bottom, but you forgive Lola because Gerwig makes her seem like you. You’ve done most of these crazy things – you know how much it hurts to break up. And if you’re in the range of 30, you know how badly you want your life to be settled at that point. 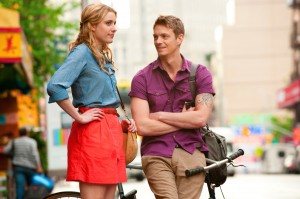 Don’t worry – it’s not just therapy on film. There are genuine laughs – even hilarious bits. Alice is whacky in a believable way. Some of the dialogue exchanges hit exactly right and provide good levity. Lola’s meltdown scene is kind of manically funny even as it turns sad. In addition to laughs, if you are a New Yorker or a fan of the city, you’ll appreciate the inside jokes and emphasis on filming on the streets of the city. The lighting, filming, and familiar locations made New York almost tangible and could inspire a visit.

At times though, the film is a bit heavy handed in showing that there is a deeper message or more than just watching a likeable heroine figure out what to do now that her life has gone off track. These bits – words from her dissertation highlighted as she figures things out or allusions to the deceptive messages of fairytales – might have worked had they been woven into the story more genuinely. Also, Lola’s parents (Bill Pullman and Debra Winger) are endearing, but it would have been great to see more of them. Especially Winger, who is not in many films anymore, but should be. Instead, they make brief appearances where they provide nuggets of wisdom or play up being overgrown hippies and are gone.

With all of that, I enjoyed this film. Obviously this is the type of movie that will resonate with women more, but the approach and antics make it appealing to men as well. You could wait for this to make it to DVD. However, if it’s at a theater near you, it could be worth it if you want to laugh at a sympathetic character you can identify with, or you want to enjoy well filmed postcard of NYC.