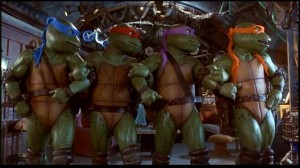 Paramount Pictures has decided to indefintely shut down the planned reboot of that Ninja Turtles film we reported about a few months ago.  The film was supposed to be released around Christmas in 2013.  Looks like that won’t be happening anytime soon.  This is the film that Michael Bay was producing and that he wanted to make the Turtles from outer-space.

Acoording to THR, the main issue for being shut down was due to script problems.  This is the third film Paramount has shut down or had problems with.  The other two big films are the sequel to G.I. Joe, and Brad Pitt’s ‘World War Z’.  Needless to say, there are some big problems going on at Paramount.  I’m very glad this has stopped production.  Director of ‘Wrath of the Titans’ (read my review here) Jonathan Liebesman was supposed to direct the TMNT film, with a heavy effects budget from Michael Bay, it was safe to say they both would have ruined this iconic franchise.

We will update you more on this topic as it comes forward.