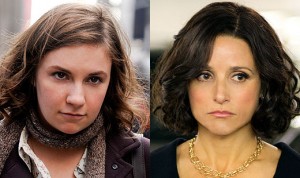 HBO has renewed its comedy lineup of ‘Girls’ and ‘Veep’ for a second season consisting of ten episodes each.  Congratulations to everyone involved in both shows.  Below is the official press release from HBO.

Second-season commitment is for ten episodes.

Hannah, Marnie, Jessa and Shoshanna are trying to figure life out. They’ve been living in New York for a couple of years, but they’re still not sure what they want – from boys, from each other, from themselves. And things aren’t getting any clearer. Created by and starring Lena Dunham (“Tiny Furniture”), GIRLS takes a comic look at the assorted humiliations and rare triumphs of a group of girls in their early 20s.

Second-season commitment is for ten episodes.

Julia Louis-Dreyfus (Emmy® winner for “Seinfeld” and “The New Adventures of Old Christine”) stars as Selina Meyer, who becomes vice president, only to discover the job is nothing like she expected, but everything she was warned about. The comedy series was created by Armando Iannucci (Oscar®nominee for co-writing “In the Loop”).