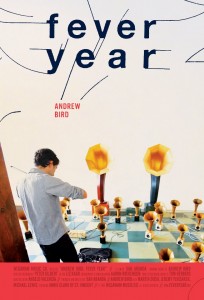 Let me start off by saying I am a huge Andrew Bird fan.  And if you do not know who Andrew Bird is, after seeing this amazing documentary by Xan Aranda, you will be hooked and consumed with both the artist and his music.  Fever Year is a compelling and fun documentary that follows Andrew Bird on his tour across the USA.  We get an in depth look at his performances on stage and behind closed doors as we see the singer/songwriter/multi-instrumentalist’s passion for music.

Andrew Bird is part Sufjan Stevens, mixed with a bit of Polyphonic Spree, and sprinkled with the elements of jazz, calypso, and the blues.  It’s truly unique.  The film was given the name Fever Year at the end of Bird’s year-long tour – such an appropriate title since Bird played almost 165 major performances across the country all within twelve months.  But actually, the title is more descriptive of Bird’s health than the fervor of the tour. Bird was sick with a fever for most of the tour, and as he stated, he was “…either sweating bullets or…freezing all the time.”

Fever Year is a candid film that intersperses behind-the-scene footage with concert footage. In other music tour documentaries, the camera (and thus the audience) can be an insignificant fly on the wall, or worse yet, an intrusion into the musician’s life. But here, the film creates a feeling of intimacy with Bird, where the audience feels as if they are in Bird’s inner-circle, hanging out with him on the tour bus or back stage.

On stage with his violin, Bird seems like an untouchable genius. But in this film, we see his soft underbelly.  You see the good, the bad, and the neurotic that make up a very human Bird, who desperately needs and is totally consumed by his audience. Much like an intervenous tube that carries both serum and toxins to the blood, these live performances simultaneously keep Bird alive while breaking him down. 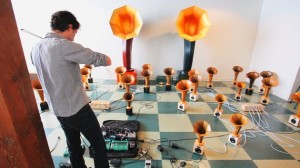 We also get to see the farm in Illinois where Bird grew up where he turned the family barn into a recording studio. He shows us how he writes his songs, and how he ruminates on his joy for the simpler things in life, like gardening and relaxing with friends and family.  From these beginnings, he developed his iconic sound. Bird created a sort of one-man-orchestra by first using a pedal-operated looping machine, where he constructs songs by playing different chords and rifts on his violin.  He plucks the strings, then bows the strings, then adds guitar, vocals, percussion, and eventually adds his famous whistling.  His whistling can be heard in the recent Muppet Movie.  The entire process is magical and Bird said “…I get to really crawl inside the songs and lose myself.”

Now Bird plays with a band. The interviews with his bandmates further help define Bird as a man as well as explain his creative process. But what insight we gain is not because his bandmates say anything remotely profound. Quite the contrary, their comments were childish and silly as if they were high school kids making their first home video. But who they are is instructive. We get a more complete picture of the serious and professional Bird because he surrounds himself with people who are his foils. They are the easy-going and light-hearted version of Bird, likely reminding him of the simple life back in Illinois and always making sure the tour is fun.

Fever Year captures a brilliant musician and shows his passion, work, and payoff.  Bird is a true artist that has contributed greatly to the music world, and Aranda’s documentary shows that with great finesse.  I’m forever a fan.