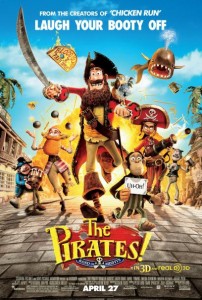 Aardman Studios proves once again that it can turn out a very charming and hilariously funny film that is fun for all ages.  The claymation is top-notch and mixed with that famous dry humor we have come to love from Peter Lord and his creations.  In the likes of Wallace and Gromit and Chicken Run, Peter Lord’s The Pirates! Band of Misfits is a great and pleasurable adventure.

We follow Pirate Captain (voiced by Hugh Grant) who’s number one priority is to be named Pirate of the Year at the Pirate Awards.  This is a difficult task for Pirate Captain since he’s so likable.  He’s even ranked the lowest on the most wanted list, with a reward for his capture being only a few dollars plus a free pen.  Pirate Captain has a true band of misfits for a crew–including an albino, a female dressed like a male pirate, a gout-ridden pirate, and the pirate who is known only as “the pirate with the scarf” and is second in command to Pirate Captain.  When I saw all of them on screen, I knew I was in for a fun ride.

The main enemy in the film is Queen Victoria who has a vicious hatred for Pirates.  If she sees a Pirate, she will immediately kill them or imprison them forever.  Meanwhile, Charles Darwin has set sail on the high sea when his ship is attacked by Captain Pirate and his band of misfits.  In the midst of looting the ship, Darwin notices that Captain Pirate’s shoulder “parrot” is not actually a parrot at all, but a very rare specimen of bird.  The last living dodo.

Now that Pirate Captain is the richest pirate in the land, he sets out for the Pirate Awards and wins Pirate of the Year.  But the award is short lived as everybody finds out he was pardoned by the Queen and is no longer wanted by the authorities.  He is stripped of his award, pirate’s license, and dignity.  His band of misfits abandon him too when they learn he sold their precious pet bird.  Alone and drowned in self pity, Captain Pirate decides to sell baby clothes.  He runs across Darwin again and is told that Queen Victoria intends to bring the pet dodo bird to a secret dinner club where kings and queens from other lands come together and feast upon the rarest of animals.  Now, it’s up to Captain Pirate to rally his band of misfits and rescue their beloved bird.  They have to break into a seemingly impenetrable royal ship undetected and save the bird…oh yes, and steal all of the Queen’s possessions while they are at it.   Perhaps this plan has just enough danger and deceit to warrant that Pirate of the Year award back.

I loved the pacing of this film.  It never slowed down or got off track.  It was funny, easy going, and very entertaining.  The voice acting was great too.  Hugh Grant lent a surprisingly animated voice to Captain Pirate.  The voice inflections didn’t even sound like Grant, deviating from the slower, more tortured tone used in his romantic comedies.  David Tennant, Jeremy Piven, Martin Freeman, and Imelda Staunton were all a pleasure to listen to as well. They really brought their characters to life.  There is even an original new Flight of the Conchords song in the movie.  Flight of the Conchords won the 2012 Academy Award for Best Song (Muppet of a Man from the Muppets Movie), and this song in Pirates: Band of Misfits is just as good.  Maybe they’ll win two years in a row.  The song will have you in stitches.