Find Out What’s In Store For ‘The Ricky Gervais Show’ In May!!! 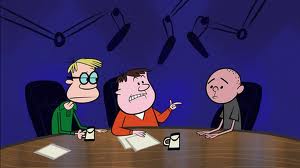 Karl learns from Ricky that he is very popular among members of the armed services and recounts how, as a kid, he looked up to his older brother, who was in the army, and longed to join himself because he made his bed so neatly. Also, Karl describes a harrowing day when he defended a pie from a bank robber, among other acts of bravery.

Ricky suggests they play “Room 102,” a take on George Orwell’s Room 101 from “1984,” and asks Karl what he would banish to Room 102 forever. Also, Karl shares his idea for keeping overweight people from eating in the middle of the night, and chooses the one item he would take with him if stranded on a desert island.

After Karl insists that he is really a happy-go-lucky guy at heart, spending most of his time home alone on DIY projects, Ricky and Stephen ask him to take them through a typical day in his life.

Ricky, Stephen and Karl take turns describing the quintessential Englishman, and Karl explains why, if he could be any nationality other than English, he’d choose to be Italian.

One thought on “Find Out What’s In Store For ‘The Ricky Gervais Show’ In May!!!”