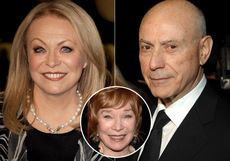 Dimension Films continues its acquisitions streak with the pick up of the road-trip comedy WILD OATS featuring a talented cast including Academy Award® winner Shirley MacLaine, Academy Award® nominee Jacki Weaver and Academy Award® winner Alan Arkin . The film is directed by Howard Deutch who helmed the classics PRETTY IN PINK and SOME KIND OF WONDERFUL, and recently worked at HBO directing shows such as BIG LOVE and HUNG. Claudia Myers and Gary Kanew penned the script which has been described as a spunky comedy that is a cross between SIDEWAYS and THELMA AND LOUISE.

WILD OATS tells the story of a retired widow (Shirley MacLaine) who hits the jackpot when she receives a Social Security check mistakenly made out for $900,000 instead of $900. She and her best friend (Jacki Weaver) then take off for Las Vegas, only to become media sensations and fugitives from justice.

“Howard Deutch has directed some great classics and the cast is extraordinary,” said Bob Weinstein, co-chairman of The Weinstein Company. “This is a clever and offbeat comedy that is sure to entertain.”

“I consider it a great opportunity and honor to work with this amazing cast, which has created some of the greatest work in recent memory,” said Deutch.

The film is produced by Blythe Frank, Agathe David-Weill and Alexander Tabrizi, with Michael Mailer and Mike Dolan executive producing.

The deal was negotiated for Dimension Films by Andrew Kramer, President, Business and Legal Affairs; and by Jack Gilardi of ICM. Gilardi repped the producers as well as Jackie Eckhouse and Bethany Haynes of Sloss Law. Shirley MacLaine, Jacki Weaver, Alan Arkin, and Howie Deutch are all represented by ICM.