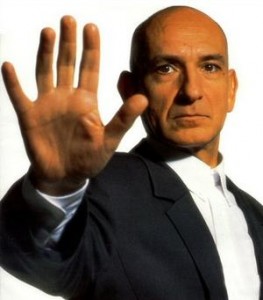 Oscar winner Ben Kinglsey (Schindler’s List/Gandhi) is final negotiations to take on Iron Man’s next villain in ‘Iron Man 3’.  A lot of fans of Iron Man were hoping to see that villain be the Mandarin, but insiders close to the film have hinted it won’t be the Mandarin.  All that I know is that when Kinglsey and Robert Downey Jr. share the screen, everything will be glittered with gold.

Marvel is keeping a tight seal on the negotiations right now and not saying what the role is, even though Kingsley’s camp has acknowledged his involvement with the film.  If you remember from the comics, the Mandarin was the wealthy chinese scientist who was very skilled in martial arts who backed the evil guy who imprisoned Tony Stark and was a tiny bit responsible for the creation of the Iron Man suit.

Supposedly, Kingsley’s villain character revolves around the spread of a virus through nanobots which is sort of from the Warren Ellis several issue series of Iron Man.  This third film will be directed by Shane Black.  Shane Black directed RDJ in ‘Kiss Kiss Bang Bang’ and wrote a the Lethal Weapon films.  The first two Iron Man films have grossed over $1 billion dollars according to Variety, and with this one set to be released on May 3, 2013, I expect Iron Man to close in on the $2 billion dollar mark for Disney.