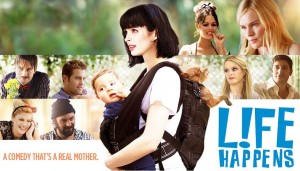 ‘L!fe Happens’ tries so hard to be a warm hearted movie that will make you laugh and feel for its characters all throughout the movie.  But due to its lack of likability of characters, and its really poor and laughable dialogue, ‘L!fe Happens’ plays out more like a 3rd rate series on Lifetime more than the funny, heartwarming, and vulgar humor type of film it wants to be.  And it’s terribly sad, because the cast of this film is amazing.  I like the cast of actors in this movie, but they were given a terrible script and nothing was executed to make me laugh or feel anything for its characters or story.

‘L!fe Happens’ wants to be a next generation ‘Sex and the City’ spin off with the humor of a Judd Apatow film.  None of that is accomplished here besides maybe the hatred I feel for the ‘Sex and the City’ movies.  The film starts out with two roomates, Kim (Krystyn Ritter) and Deena (Kate Bosworth) who are both in their separate rooms about to hook up with they random guys they brought home from the club.  They both run out of their rooms at the same time in search for a condom.  To their dismay, there is only one spare condom left to which Deena gets it.  The film immediately flash forwards about a year or so later and we see Kim with child.  Insert the title of the film, ‘L!fe Happens’, and that is what this film tries to convey.  Kim is trying to take care of her child while still maintaing a a life where she can go out and meet guys and have fun.  Deena is a successful writer whereas Kim is a dog walker and sort of personal assistant to a famous actress who treats everyone, especially Kim like shit.  Kim is naturally jealous of Deena.  Their third roomate, Laura (Rachel Bilson) plays an extremely ditzy self proclaimed virgin who holds all sorts of odd jobs.  Her character has nothing to do with the film and seems to only be added for comic relief which there is none of, besides her being in very scantily clad clothes.  These three roommates are not likable at all while all their dialogue doesn’t come off as real or funny or genuine. 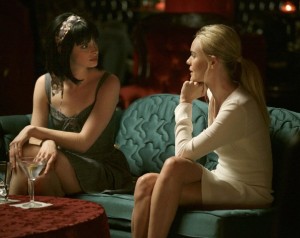 Finally, one night Deena and Kim get  night to go out on the town together and Kim meets a guy named Nicolas (Geoff Stults) who of course is successful and handsome and everything she wants.  Their relationship starts with Kim lying to him that her kid is not hers but her roommates.  Again, these characters are not likable.  Then it’s the same old story you’ve seen time and time again, only this time, it isn’t good.  The relationship between Kim and Nicolas starts out well, but the lies come out, and their relationship ends.  But somehow at the end of the film, they are magically back together and everyone is happy.  This all felt rushed, uninspired, and my time.

There were two things I liked about this film.  Number 1 being, the cast.  With a cast that has: Krystyn Ritter (Breaking Bad), Kate Bosworth (Superman Returns), Justin Kirk (Weeds), Jason Biggs (American Pie), and Seymour Cassel (Minnie and Moskowitz); you would think that this film would be all sorts of good.  It never happens.  Not even a little bit.  Seymour Cassel and Jason Biggs are on screen for a total time of about two minutes or less.  And both of them barely have any speaking parts.  That’s a disgrace.  The other thing I liked about this film was Justin Kirk.  He actually brings the comedy to a comedy film that has no comedy.  But sadly, he doesn’t get a lot of screen time, but when he does grace the screen, he steals the show.  That’s pretty much it.

Kat Coiro directed this film and wrote the film alongside Ritter.  This marks Kat’s first feature film she has directed and according to her IMDB page, she has a couple of other films coming up with spectacular casts.  But if this is what we can expect from her, then I feel very bad for everyone involved.  I hope she gets better, but ‘L!fe Happens’ is a waste of time, resources, and effort.  The characters are not likable in the least bit, the dialogue is awkward and poorly written, and there is no satisfaction or redeeming quality about it.  If you want a funny film about unexpected pregnancy, re-watch ‘Knocked Up’.