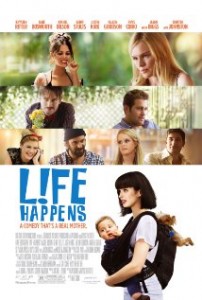 From the beginning of L!fe Happens, we know this film is going to be a bit bawdier than the usual chick flick , as best friends Kim (Krysten Ritter) and Deena (Kate Bosworth) frantically decide who gets to use the last condom in the house. Fast-forward many months later and we find the pair flirting with guys in the car next to them only to be thwarted by baby buzz kill, Krysten’s consolation prize for losing use of the condom. From here the audience is taken on the expected journey of Krysten growing into single-motherhood, looking for love, and holding onto a changing friendship.

Though L!fe Happens strives to deliver on its not-your-usual-chick-flick promises with raunchy and engaging comedy, much of the dialogue comes off stilted. Trying to mimic the fast-paced banter of a Gilmore Girls or Juno, the actors never settle into a comfortable pace. With a few exceptions – Jason Biggs in a cameo appearance as a divorce attorney and Bosworth and Ritter’s rapid dissing of Rachel Bilson in a maid outfit – the dialogue proves to be stiff and punctuates how timing really is everything in these kinds of movies. 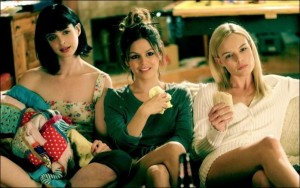 As the comedy is slightly off, so is the romance between Krysten and the gorgeous Nicolas (Geoff Stults). After meeting at a club and a stalker-like move on Nicolas’s part, the couple find themselves on a date a local diner. Here a contrived food preference (OMG! You like appetizers too? Kismet!) is the sole common interest we discover, but eventually, after the usual Rom-Com misunderstanding, the pair find their way back to each other. The more interesting romance of the film takes place between Deena and Nicolas’s friend, Henri (Justin Kirk). When the two meet we know that though Deena detests Henri’s quirky and clueless ways, he’s going to worm his way into her heart. The two make a highly enjoyable odd couple because we find out more about why ultra Independent Deena and oddball Henri belong together than we do about Krysten and Nicolas.

As difficult as the dialogue and the forced romance are, the premise of the story is commendable. You do empathize with Ritter as she slowly comes to realize she has to grow up (even if you also want to smack her and hurry her along in the process). It would be difficult for any young woman to be the one saddled with the care of a child, and the writer was correct to try and use comedy to engage the audience on this topic rather than be too serious and turn the movie into an extended after school special. The progression of Krysten’s growth feels right for how it might happen for a woman in a similar situation. She redeems herself in the end, and though the movie doesn’t deliver on the laugh marathons that one gets in a Judd Apatow film, it’s still an interesting story.

In the end everything is tied together rather nicely. Krysten and Deena enter a new era of friendship, the women get their men, and the baby is going to be loved and supported by a now mature mover. Of course it ends this way – it’s a Rom-Com. The audience is made to confront some messy/scary issues, but we walk away without having to worry about to the plight of any of the characters, knowing all will live happily ever after.

Overall, I respect the story but wished for more out of the comedy and romances. This film deserves a watch if you are a RomCom fan, but there is no need to head to the theater. This is a story that can wait until it appears on your Netflix.