Bryan’s Review of ‘Wrath of the Titans’!!! 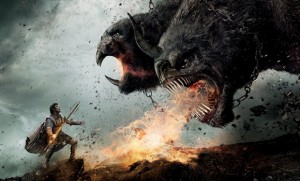 I had the distinct displeasure of seeing ‘Wrath of the Titans’ this week.  This sequel to the remake of ‘The Clash of the Titans’ is a complete and utter sad disaster on every level of filmmaking.  I haven’t seen a film willingly destroy itself in every way in a long time.  I’m really not sure what the filmmakers and execs were going for with ‘Wrath of the Titans’, but if they wanted an all out jumbled mess of a film, then they succeeded.  As one of my friends who screened the film with me said, “I expect nothing from this film.”  Well, we got nothing from ‘Wrath of the Titans’.  The screen might have well been a blank screen for two hours, because then maybe my imagination could have projected something better than my eyes viewed.

Where do I even begin with this turd of a film?  So ‘Wrath of the Titans’  picks up a bit after where the remake of ‘Clash of the Titans’ left off.  We have Perseus, played by Sam Worthington (Avatar) who has declined to be King and rule by his dad’s (Zeus) side.  So he is living the life of a normal mortal man.  He has raised his son and living a somewhat drama free life, that is until Ares (Edgar Ramirez) and Hades (Ralph Fiennes) kidnap Zeus (Liam Neeson) and bring him to the dreaded Cronos.  Hades and Ares drain all of Zeus’ power and transfer it to Cronos so that Cronos can destroy rule the planet.  One this happens, Cronos unleashes monsters and an evil demon army upon the land.  And it is up to Perseus to save his father and everyone else.  That looks good on paper doesn’t it?  But something went wrong somewhere and nothing in the film went as planned.  First off, the acting is some of the worst acting I have ever seen.  And I think they had a great cast, but it seemed like each actor was reading of a cue card in front of them for the first time.  It all came across with out any emotion or passion.  It was more like “Why are we all here again?”  And Perseus’ son Helius (John Bell) gave the worst acting performance since Jake Lloyd played a young Anakin Skywalker in the Phantom Menace.

Now let’s move on to the monsters.  There was a two headed monster dragon with a snake for a tail.  That sounds cool in theory.  But with too many quick cuts and tons of smoke from all the houses it destroys in trying to kill people, I could barely see it.  It had no agility and was a big floppy clumsy  dog of an animal, that the only redeeming quality it had was that it breathed fire.  But the fire seemed to never burn anything.  Not even the wooden door.  Boooooooo this movie.  Then there was a cyclops.  Scratch that.  A cyclops family complete with a geriatric cylcops with a walking stick.  These giant beasts did no damage either and when one of them was pinned down by a small human, the cyclops geriatric dad had to break up the fight.  I literally slapped my forehead.  Then there was this cool underground warrior demon with two upper bodies facing opposite directions that could move through a group of people with ease.  This was easily the best part of the film which lasted a few seconds.

I’m going to spoil this movie for you, because there is no point to you seeing it, but at one point Hades has a change of heart and decides to save Zeus from his death. The two gain all their strength back and decide to “have a little fun”.  I shit you not, that is an actual line of dialogue uttered between the two when they decide to go kill demons.  When they do this, I swear I heard AC/DC’s ‘Back in Black’ song come over the speakers to watch them walk hand in hand and turn in to Jedis.  Yes, they force pushed every demon to death.  Again. Booooooo this movie.

One might say that the special FX in the film will be great and that alone is worth seeing.  Let me correct you.  No.  Actually the FX felt rushed and something that was made 15 years ago.  The special FX monsters are not onscreen long enough for the human brain to acknowledge that what you are seeing on screen is something cool or a monster.

Stay away from this horrible film.  You have a friend or loved one who really enjoyed this film, then I would consider not returning their phone calls.