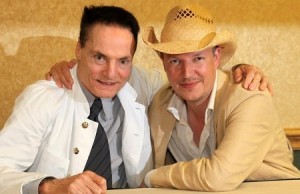 With about six weeks left until shooting begins on the 3rd and final ‘Human Centipede’ film, things have come to a grinding halt.  We have reported that director Tom Six will have a 500 person centipede for his final act in the trilogy and had Dieter Laser (the original surgeon villain from the first film) to star in the third movie.  Now it seems that Dieter has pulled out of the film last minute and Tom Six and his company are not happy at all about it.

Six is so unhappy, that he and his company are suing Dieter Laser for backing out of the film after he signed a contract to star.  And if this does actually go to court, that will put an indefinite hold on the production and release of ‘The Human Centipede 3’.  I can’t see a relationship with Laser and Six after this, which means rewrites and more prolonging the future of the final ‘Human Centipede’.

Here is a letter from Llona Six (the producer of the films):

Because of the success of The Human Centipede, it seems that Mr Dieter
Laser’s ego has grown to laughably big proportions. First signing the
contract and rating the THC3 script as fantastic ,and then demanding his
own unacceptable script changes, and now refusing to play the part only
seven weeks prior to shooting. Six Entertainment Company will start
legal action against Dieter Laser. Tom Six says not to worry – principal
photography will be postponed and will take place later this year.

Wow.  I hope everything goes smoothly.