Sci-Fi Expo Coming February 11-12 in Dallas!!! Find Out Who Will Be There and Much More!!! 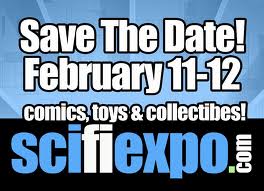 Fans of Dollhouse, Firefly, Angel, Stargate and Battlestar Galactica can meet some of their favorite stars from those and other shows during the upcoming Sci-Fi Expo on Feb. 11 and 12 at the new Irving Convention Center in Irving, Texas. Comic fans won’t be left out in the cold either with a variety of artists showing their work in Artists’ Alley.

This is the third convention Dallas Comic Con’s producers have hosted at the center since it opened last spring.

“We’re really happy to bring our sci-fi-themed show to this beautiful new facility,” said producer Ben Stevens. “With 300,000 square feet at our disposal, the Irving Convention Center provides room to spread out and really grow, and the fans have told us they really love our new ‘home’ as well.”

Topping the Sci-Fi Expo’s guest list is Eliza Dushku, star of Dollhouse, Buffy and Angel, as well as numerous movies, including True Lies, Bring It On and Jay and Silent Bob Strike Back. Ms. Dushku will be greeting fans and signing autographs on Saturday only, as will Adam Baldwin. Mr. Baldwin starred in the 1987 movie Full Metal Jacket, recently played “Agent John Casey” on the TV show Chuck, and was in The X-Files and Firefly series.

In addition to meeting the actors and artists, fans are invited to attend Q&A sessions with the guests at no additional charge. They also can peruse more than 200 exhibitors’ booths featuring comic books, movie memorabilia, old and new toys, clothing and other merchandise. For an additional fee, fans may have their photo taken with select actors by a professional photographer.

Admission to the Sci-Fi Expo varies depending on level purchased.

VIP passes ($60) give customers admission to the show 30 minutes prior to other ticket holders, first access to the autograph area, and first seating in the Q&A sessions. Passes are good Saturday and Sunday with a limited number available.

Priority passes ($40) also are limited in number, allow customers into autograph areas ahead of general admission, and are good Saturday and Sunday. One-day General admission is $15. Admission for children ages 5-12 is $5 when accompanied by a paid adult; children’s passes are good both days.

For more information or to order advance tickets, please visit the website at www.scifiexpo.com.