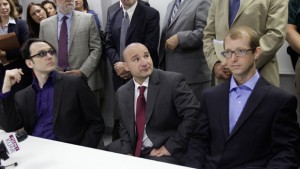 Colin Firth and Reese Witherspoon have joined the cast of ‘Devil’s Knot’, the story of the West Memphis 3.  The West Memphis 3 case is about 3 teenage boys who were convicted of brutally murdering three young boys without any evidence.  The teenagers have been in jail for 18 years and were freed just a few months ago.  There has been three HBO documentaries covering the whole case called ‘Paradise Lost’.  The third one which was just nominated for an Oscar.

“Firth will play Ron Lax, a private investigator who was the first pro bono supporter of the defendants as they headed to trial in 1993. Lax built one of the most prominent private investigative firms in the Southeast, and offered his services for free to the defendants, who at the time were reviled because of the heinous nature of the crime and the sensationalized reports about devil worship and ritualistic sacrifice. All of that was later proven to be unfounded, after Damien Echols, Jason Baldwin and Jessie Misskelley were convicted despite not a shred of physical evidence. Lax was an unsung hero and helped find the DNA in the knots that bound one of the victims, that cast suspicion on Terry Hobbs, the stepfather of Steven Branch, one of the 8-year old murdered boys. Witherspoon will play Pam Hobbs, the mother of Branch. She initially believed the trio murdered her son, is eventually persuaded that the three suspects are innocent and wrongly accused. Filming begins next summer in Louisiana, and other big names are expected to join the cast in smaller roles.”

The script is based on investigative reporter Mara Leveritt’s 2003 book Devil’s Knot: The True Story of the West Memphis Three.  The director and writer have been working on this project since 2006, which I like.  It shows these two are really involved in the case and not trying to score while the iron is hot sort of thing.

Can’t wait to see this.