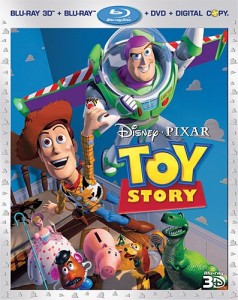 I can’t believe it has been over a decade since Pixar won me over with Toy Story.  Year after year, Pixar has shown me their films and for three years in a row their films were my absolute favorite of the year. It all started with Toy Story.  I always thought as I’m sure most of you did that when I left my room or house, that my toys were alive and talked and had fun together without me.  Toy Story showed me how this could be real.  Not only did Toy Story create what I dreamed of every day, but it paved the way for every CG film made since then.  Toy Story was the first.  It truly was a milestone and achievement in filmmaking.  And add to that they amazing story, cast, and music.  I whole heartedly love this movie.

Pixar is pure magic.  This story is timeless and classic for even today’s standards.  The main character is a pull string cowboy doll named Woody who when his owner, Andy leaves his room, comes alive and is known as Andy’s favorite toy.  Woody is threatened when Andy get s a new high tech toy from the future and space called Buzz Lightyear.  Buzz, unlike the rest of  Andy’s toys, thinks he is a real space man and on a real mission and not a play toy.  The main villain of the film is Andy’s next door neighbor, Sid.  Sid is Andy’s age, but instead of loving and playing with his toys, Sid is obsessed with blowing them up and mutilating them.  The first half of the film Woody and Buzz are not friendly, but the latter half, they join forces and save the day.  Every toy in Andy’s room is brilliant.  You love each and every one of them, no matter how much screen time they have.  This film is for all ages and really does appeal to any age.  This is what makes it such a classic.  Now, as I have discussed before on here, Disney has been re-releasing their films with the 3D treatment.  These Toy Story films all came out several months ago, but are now re-released with the 3D touch.  Now the first Toy Story film was not intended for 3D, so the 3D here isn’t the best you will see, but it most definitely adds a lot of depth to the film and comes with a couple of pop out moments for your enjoyment. 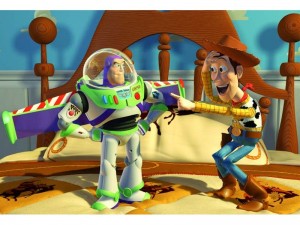 The video comes in 1080p with a 1.78:1 transfer.  It looks phenomenal.  The 2D bluray is the same as the previous bluray release.  The 3D version is top not too.  As I said above, the 3D is pretty decent but not the best as let’s say Avatar which was made for 3D or Toy Story 3 which was released in 3D.  The 3D reigns supreme with the depth with this release.  Tons of depth are given in each scene.  Such as looking out a window or down a street or when several characters are on screen.  3D nowadays is not just about objects flying at you.  Don’t get me wrong, there are a few instances of that here, but it is all about the depth with this one and it looks amazing.  The detail is vibrant and sharp and the colors are bright and beautiful.  This 3D version is definitely cool and gives you a new and great experience, but the 2D is equally as great.  The audio has a DTS-HD Master 5.1 mix.  This mix is both on the 3D and 2D version.  This sounds magnificent.  The dialogue is clear and crisp and the action scenes are full and robust and pack punch.  Your bass will rumble and the score of the film will light up you speakers.  Truly a marvel in sound. 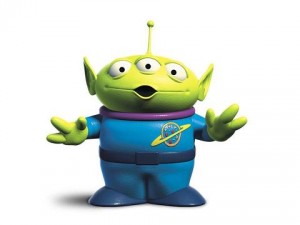 THE ULTIMATE WORD
This 3D experience definitely gives you a new view to this modern classic film.  Fans of 3D are sure to be pleased and will want more.  The film itself is pre excellence and should be owned on that factor alone.  The extras are a plenty and the video and audio is top notch as usual with Pixar.  This is a must own.  Enjoy it both on 3D and 2D.
-Bryan Kluger