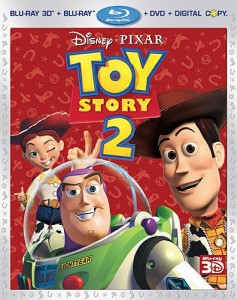 Toy Story 2 is definitely in my top list of best sequels ever.  It shares the list with Godfather 2.  It’s always a crap shoot with sequels, but Pixar did it right with Toy Story.  It added new lovable characters along with some new villains.  And again with the 3D, this sequel amps of the 3D from the first film.  The story is just as good as the first one and adds new laughs and plot.  It never seems redundant from the first film and is always quick to satisfy.  Also let us note that this was the first time Pixar toyed with my emotions making me choke up.  They enjoy doing this to me in later movies like Wall-E, and Up.  But, Toy Story 2 3D edition is badass on all levels and any 3D enthusiast and lover of films and Pixar should rush out to get this.

The cast of characters returns and this time, Andy has gone to summer camp leaving his toys to do as they please for a few weeks.  Woody learns that his model and make has gone out of print and that he is pretty high priced in the collector field and is rare.  Some nerd collector steals Woody for his collection to make a small fortune.  The rest Andy’s toys led by Buzz set out to rescue their pal.  This was wonderful to see.  I wanted to see what Pixar would make of the super collector nerd.  It came across as evil which is true since the collector stole Woody.  But it was truly fun to see.  What really got me was at the beginning of the film, I saw Woody realize that Andy was going to grow up really soon and not be interested in playing with his toys.  You genuinely feel bad for Woody.  This would come in to play in Toy Story 3.  Some new characters come in to play in the sequel such as Woody’s toy friend Jessie played by Joan Cusack.    Excellent character and voice actress to give Jessie life.  And not only was the story just as good as the first film or better, the animation in just a few short years got 100 times better.  You can really notice a difference between the technology between the first two films.  AMAZING. 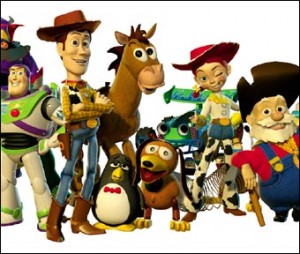 Toy Story 2 comes with an impressive 1080p picture presented in 1.78:1 aspect ratio.  Just four short years from the first film, technology came so far that not only does the 3D look significantly better than the first film, but the overall CG quality and clarity is significantly better as well.  The 3D really pops.  From the first scene of the film till the last scene of the film, the 3D never stops.  There is a treasure trove of pop out effects throughout the film and the depth is uncanny.  It looks really great.  The detail and colors are vibrant, and perfect.  Flawless video presentation.  The Buzz video game is just packed with objects flying out at you.  Loved every minute of it.  The audio is aDTS-HD Master 5.1 mix and is also perfect.  The dialogue is crystal clear and robust and the action sequences pack bass and full sound.  And yes Randy Newman is back for his music to light up your room.  This audio/video presentation is incredible. 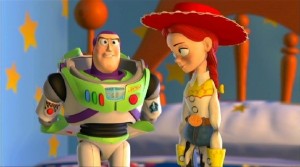 THE ULTIMATE WORD
Toy Story 2 is really an upgrade from the first film.  The 3D is better as well as the sound, video, and story is better in my opinion.  I love everything about this film and this release.  The 3D is amazing and the extras are fun as hell.  The film sounds and looks stunning.  This is a must own for everyone.  Get this as soon as possible.
-Bryan Kluger