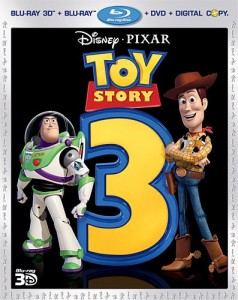 Dare I say Toy Stoy 3 is my favorite of the three Toy Story films?  Yes, I dare say it.  Pixar has given me so much over the years in the ways of great and original stories, characters, laughs, and tears.  Upon hearing that Pixar would be making yet a third film, I was excited yet a little weary on a third sequel.  Track records show the third sequels of many films have been terrible.  I was just hoping this would not befall Pixar’s flawless track record.  Well let me just say, that Toy Story made me laugh out loud several times, shed a few tears, and talk about how great the film was for weeks.  Not to mention that the 3D in Toy Story 3 is top notch.  This is the best the 3D has looked out of any of the Pixar films.  This is a must own film and must have for any 3D lover.  Toy Story 3 rocks!!

Like I mentioned in my Toy Story 2 review, there was going to come a time when Andy would grow up and spend a lot less time playing with his toys and then eventually when he would not play with them at all.  This is that time.  Toy Story 3 takes place a few days prior to Andy leaving for college.  Woody and his dwindling group of friends are trying to come to terms if they will ever get played with again.  Andy’s mom tells him to gather up his toys to either go in the attic or to the trash.  The toys know and Andy knows they will be going to the attic, but after a little confusion the bag is mistaken for the dump and the toys are off to the landfill.  But successfully, the escape the garbage truck and decide to make their way to the local daycare where they will be played with everyday.  Woody tries to tell his friends that them being put in the pile of the garbage dump was a mistake, but nobody listens and all seems well at the daycare, but unfortunately that is not the case.  The toys are banged, bashed, thrown, and almost destroyed.  The daycare is led by one seemingly sweet bear called Lotso, but he has other intentions.  Andy’s toys quickly see this evil turn and thus try to escape and make it back to Andy’s house.  Toy Story 3 was in my top three films of that year.  It is so amazing in every way shape and form.  All the new characters are great especially Ken as in Ken and Barbie.  Ken is voiced by Michael Keaton to perfection.  There is a scene in Toy Story 3 that just got me.  It really choked me up.  It was so wonderful that Pixar decided to put this scene in the film.  Of course I’m talking about the furnace scene.  All of Andy’s toys are about to be incinerated to ash.  They all accept their fate and join hands to die together.  That was very emotional for me.  It really was a gripping scene.  I only hope they will make a 4th installment of the Toy Story franchise.  I think it could be great.  The 3D is out of this world. 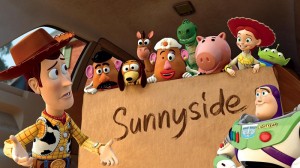 The video is presented in 1080p 1.78:1 aspect ratio.  And everything looks flawless.  The tones and textures are lifelike and the colors are vibrant and pop.  The blacks are inky and deep. The 3D is simply superb.  Pixar made the 3D more lifelike rather than have tons of things fly out of the screen at you.  This really how should all 3D should be.  The detail in the backgrounds and hair is uncanny.  The picture is sharp and energetic.  What an amazing video transfer.  The audio comes with a very impressive 7.1 DTS-HD Master mix and just kicks all sorts of ass.  The sound just scoops you up and takes you away in ever scene.  Pixar really out did themselves with this sound mix.  The dialogue is crystal clear and all the ambient noise of things flying by, and things clanking around really made me think they were in the house.  And the bass really hits in the first scene and the incinerator scene.  It really is a magnificent mix. 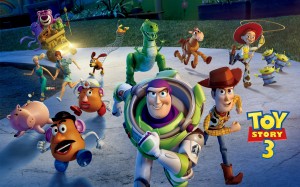 ‘Toy Story’ Trivia Dash  – Play this Toy Story trivia game with your remote.
THE ULTIMATE WORD
Toy Story will rock your world.  This release is flawless.  The extras are amazing and robust.  The picture and sound are incredible and are demo worthy on all levels.  The 3D is classy and just perfect.  The movie itself is a gem and modern instant classic.  I love everything about this film.  I wish I could watch it for the first time again.  Buy this bluray.  It is a MUST OWN.
-Bryan Kluger